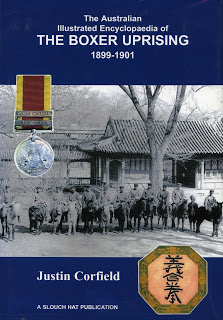 What was the Boxer Uprising? Western Countries, especially France, Germany, Britain and the United States controlled most of the trade between China and the West at the end of the nineteenth century. Merchants from these countries also demanded land, the right to build railways and ‘extra territorial rights’ where they were subject only to the laws of their own country and not Chinese law. As a result, many Chinese joined anti European Secret Societies, including the violent I-ho-ch'uan (the Righteous and Harmonious Fists) who were named the Boxers by Western media. In 1899, the Boxers and other militant societies combined in a campaign against the Westerners, including merchants, Missionaries and westernised Chinese.

In 1900 this uprising became more wide spread and nine Western nations responded by sending in warships and armed forces. Though Australian troops were largely involved in the Boer War in South Africa, the Australian Colonies sent Naval Contingents to China to support Britain. One hundred and ninety seven men came from Victoria, two hundred and sixty three from New South Wales and one hundred and three from South Australia. The first Australian contingents left at the end of July 1900. Many of the Australians were too late to take part in battle and instead had a role in restoring civil order, and they left China in March 1901 to return to Australia. No Australian was killed by enemy hand, although six died of illness or injury.

I have found a Casey Cardinia link in the book. Joseph Edward Hughes, who was born in 1861, was part of the Victorian Naval Contingent (2).  Joseph had married Elizabeth Anna McDonald in 1887 in Sydney. His occupation on his marriage certificate was ship's mate (3). The couple moved to Victoria where their children were born - Edward Dominick, 1889 and registered at Collingwood; Emma Augusta, 1890, Collingwood; Elizabeth Anna, 1892, Carlton; Joseph Edward, 1894, Koo Wee Rup;  Neil Alexander, 1896, Bunyip South (later called Iona) and George, 1900 in Surrey Hills, Melbourne (4).

In the 1890s, Australia was in a Depression, with up to thirty percent unemployment. Unemployment benefits were generally linked to Public Works schemes, one of which was the Village Settlement on the Koo Wee Rup Swamp. The aim of the Village Settlement was to stop people drifting to the City, allow them to receive an income and become self sufficient on their small farms. Under this Scheme, men could obtain employment with the Public Works Department, if they were married, registered as unemployed and accept a block of land of up to twenty acres (8 hectares). They had to work for wages for two weeks and undertake improvements on their block on the alternate two weeks. By August 1893, 265 men were employed by the Public Works Department.

Was Joseph Hughes one of these settlers? Certainly the time frame fits. He was a married man with children, so he fitted the demographic of the Village Settler. Two of his children were born on the Koo Wee Rup Swamp. By 1899 the Village Settlement Scheme was abandoned, and at least one third of the settlers had left the area, including the Hughes family. The most common reasons for leaving were the fact that twenty acres was not a sufficient size of land to support a family, there was no alternative employment and many settlers had no previous farming experience, such as Joseph Hughes, whose occupation is listed in the book as a painter. 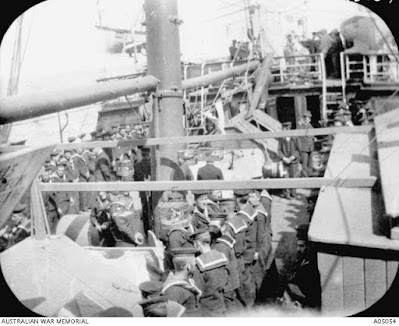 SS Chingtu, the ship which bought Joseph Hughes back to Australia from China in 1901.
Australian War Memorial Image A05054. Their caption is A parade on board SS Chingtu, returning from China in 1901 with the Australian contingents of the NSW Naval Brigade on board. Note the birds in the cages. The China Steam Navigation Company's SS Chingtu was Transport 105 for the voyage carrying the contingents back to Australia in 1901

The family had moved from the Swamp and were living in Surrey Hills in Melbourne in 1900 when Joseph enlisted. Did Joseph enlist from a sense of duty, a sense of adventure, the need for a secure pay packet or did he have a yearning to go to sea again? We don’t know and it may have been a combination of all these factors. He embarked for China on July 30, 1900 on the SS Salamis, his rank was Able Seaman,  and returned to Australia on the SS Chingtu on April 25, 1901 (5).  It then appears the family moved back to New South Wales and lived in another Surry Hills, this time in Sydney.  Joseph died at the age of 64 in 1925 and Elizabeth died  in 1921, aged 57. They are buried at Rookwood Cemetery in Sydney (6).

Joseph and Elizabeth’s sons Joseph and Neil enlisted in the First World War. Joseph was 23 when he enlisted in April 1918, but he was rejected on medical grounds due to acute rheumatism. His next of kin was his father, Joseph, of 565 Crown Street, Surry Hills, Sydney (7). His birthplace was listed as Bunyip, but as we saw before the birth was registered at Koo Wee Rup, because the first Registrar of Births and Deaths at the eastern end of the Swamp was not appointed until January 1, 1895 when James Pincott was appointed for Bunyip South (8).

Neil (service number 3322) enlisted in August 1915 at the age of 19, his birth place is listed as Bunyip and his next of kin was his father of the Crown Street address. In July 1916, Neil suffered a gunshot wound to the back and abdomen and  later returned to Australia and was medically discharged in November 1917 (9).

I do a lot of research and sometimes you are fortunate that you find a document that ties everything together, so I was pleased to find this letter written by Joseph senior in Neil's A.I.F file at the National Archives of Australia. The letter gives 19 year old Neil, born on the Koo Wee Rup Swamp at Bunyip South, permission to enlist and is signed by his father, Joseph Hughes and underneath he has written Late of the Naval brigade and China Naval Cont [Contingent]. 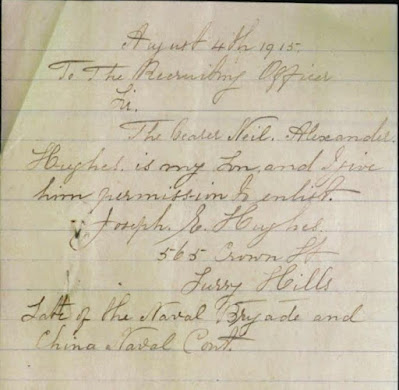 Joseph Hughes' letter, giving his son permission to enlist, from Neil's A.I.F. file.
Image has been cropped. National Archives of Australia www.naa.gov.au
First Australian Imperial Force Personnel Dossiers, 1914-1920
Joseph Hughes and his family were only on the Koo Wee Rup Swamp for possibly four years, but he does give our region a link to the Boxer Rebellion in China.
Footnotes
(1) The Australian Illustrated Encyclopaedia of the Boxer Uprising, 1899-1901, by Justin Corfield (Slouch Hat Publications, 2001)
(2) Australian War Memorial Nominal Rolls -  https://www.awm.gov.au/collection/R1443019
(3) His marriage certificate is on-line on a family tree on Ancestry. They were married August 8, 1887. Joseph, who was 26,  was born in Monmouthshire, England (According to the Encyclopaedia Britannica on-line - see here - From the 16th to the early 20th century Monmouthshire was sometimes considered administratively a part of England and sometimes a part of Wales). His parents are George Hughes and Emily Maddox. Elizabeth, who was 24,  was born in Pyrmont, NSW to Neil McDonald and Annie Rebecca Baker.
(4) I believe I have all the children correct - the information comes from the Index to the Victorian Births, Deaths and Marriages https://www.bdm.vic.gov.au/
(5) Australian War Memorial Nominal Rolls -  https://www.awm.gov.au/collection/R1443019
(6) Ancestry Cemetery Headstone Transcriptions, 1837-2003
(7) National Archives of Australia, read his file, here.
(8) Victoria Government Gazette January 4, 1895. p. 1, see here.
(9) National Archives of Australia, read his file, here.
Posted by Heather at 6:19 PM