I thought it would be interesting to find out what historic connections there were between the Casey Cardinia region and some of the pre-Great War conflicts, specifically the Crimean War. However, I discovered that one Crimean veteran also fought in the Indian Mutiny, as it was traditionally known.  We will start of with a short history of both conflicts from the Australian War Memorial website.

The Crimean War (1853 to 1856) was fought between Imperial Russia on one side and an alliance of France, the United Kingdom, the Kingdom of Sardinia, and the Ottoman Empire on the other. Most of the conflict took place on the Crimean Peninsula, with additional actions occurring in western Turkey, and the Baltic Sea region. (Australian War Memorial website, see here)

The Indian Mutiny - The Indian Rebellion of 1857 began as a mutiny of sepoys of British East India Company's army on the 10th of May 1857, in the town of Meerut, and soon erupted into other mutinies and civilian rebellions largely in the upper Gangetic plain and central India, with the major hostilities confined to the region of present-day Uttar Pradesh, Uttarakhand, northern Madhya Pradesh or Saugor and Nerbudda Territories, Delhi, and Gurgaon. The rebellion posed a considerable threat to British power in that region, and it was contained only with the fall of Gwalior on 20 June 1858. The rebellion is also known as India's First War of Independence, the Great Rebellion, the Indian Mutiny, the Revolt of 1857, and the Sepoy Mutiny. (Australian War Memorial website, see here)

I knew we had some Crimean veterans who had come to Australia and lived locally as there is this paragraph in the book Early Days of Berwick - Two Crimean War Veterans, Mr Drummond and Mr Adams, resided in High Street, Berwick. These two old gentlemen wearing their Crimean War medals, could often be observed sitting in the Boulevard, enjoying the sunshine. It was said that Mrs Drummond was contemporary with and associated with Florence Nightingale, nursing at the Crimea.

I can find no information on Mr Adams, but a report in the South Bourke and Mornington Journal of August 10, 1911 said that Tom Drummond celebrated his golden wedding anniversary on Friday evening and Private Tom wears a couple of Crimean medals of which he is justly proud (see article here) So, now we know Mr Drummond's first name and according to the Electoral Roll, his wife was called Mary.  The Victorian Births, Deaths and Marriages Index tells us that Tom died in 1915 at Berwick, that he was aged 86 and his mother's name was Mary and his father's name was Thomas. His obituary in the Berwick Shire News of  June 23, 1915 said that he came to Adelaide in 1875 and eight years later moved to Victoria where he lived at Toora and Mirboo North and he came to Berwick about four years ago.  Tom was attached to the Coldstream Guards and was in the trenches at the taking of Sebastapool and the battle of Alma. He was also in other minor engagements, and was awarded the Crimean war medals issued by the English and Turkish Governments, which he greatly treasured (Berwick Shire News June 23, 1915, see here) I am not sure when Mary passed away - there is a Mary Anne Drummond who died in 1927 in Cheltenham, aged 89 (parents listed as Michael Seabright and Elizabeth Tobin). This is possibly her. It is quite interesting that Mrs Drummond nursed with Florence Nightingale, I will do some more research on her (Mrs  Drummond) one day.

I found this in Punch magazine of May 14, 1914 and I feel the article must be about Tom and Mary Drummond - An interesting presentation was made to Lady Stanley during her visit to Beaconsfield last week. This was an old Crimean veteran, as far as is known, the only surviving one in this part of the world. His wife, an elderly lady, who was also present the same afternoon, came in for much attention. She was one of Florence Nightingale's nurses, and pursued her work of healing through the horrors of the Crimean War also. The old gentleman is eighty-five, and his wife is seventy-five. The old lady was very worried because her husband had been presented to Lady Stanley whilst she had not, and "e'll be crowing over me, too, and I've got something interesting to tell Her Ladyship." Later in the afternoon the second presentation was duly made, and Lady Stanley was very interested to hear that her grandmother was also one of the volunteer nurses who went out with Florence Nightingale. When the guests departed the old couple were left happily hand in hand comparing notes over the events of the afternoon, both looking well and happy, in spite of the fact that the old lady had been operated on only six weeks ago. (Punch, May 14 1914, see here)

Another Crimean veteran who lived in the area was Color-Sergeant William Fist who died February 14, 1921 at the age of 80. He was also a veteran of the Indian Mutiny. William Frederick Fist is listed in the 1919 Electoral roll at 4 Grattan Street, Prahran, with his wife Fanny Maria Fist (nee Croxford) whom he married in 1912, so I am not quite sure of the connection to Lyndhurst, but it is listed in the death notice and the short obituary that appeared in the Frankston and Somerville Standard (see below) refers to him as an old Lyndhurst identity, and who had taken part in the Seige of Lucknow. 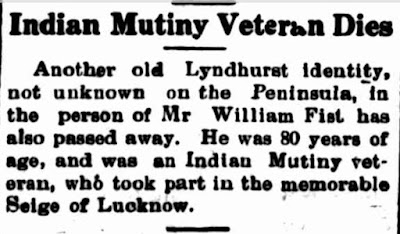 From various newspaper reports we can build  a picture of some of William's life. In April 1875, William was brought before the Emerald Hill Court by his wife Elizabeth for maintenance. The report said that the marriage of the pair took place in India in 1860, and in consequence of the insobriety of Mrs. Fist, a separation took place some time since. The defendant, who held a commission in the 16th Lancers in India, and was now filling the occupation of coachman at Toorak. (The Age April 15, 1875) The result of the court case was that Mrs Fist was granted 7 shillings and six pence per week. Mrs Fist was back in Court in August 1889, claiming the William had not paid maintenance since October 1886 and that she was thus owed £52.

Two years later he was back in Court on a perjury charge. William had given evidence at an Inquest at the City Morgue that the deceased woman, Mary Anne Keilly, who was the subject of the Inquest,  was his wife, when in fact they were not married but had been living together for years and she was known by the neighbours as Mrs Fist. His Honor said that in committing the crime of perjury the accused did not appear to have been actuated by any sordid motive. But the circumstance did not justify the prisoner in perjuring himself. His Honor believed that he swore what was untrue to save the character of the woman with whom he had been living, and for the sake of the character of her children. (The Herald July 27, 1891, see here)

In 1909 the Weekly Times had some photographs of Naval and Military Veterans taken at the Victoria Barracks, and William Fist was in one of them. 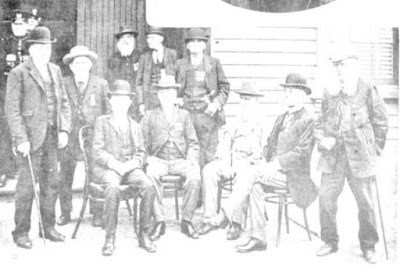 The only other Crimean War connection I can find was that of Charles James Jago, who died February 1, 1914 at the age of 77. He had been Mayor of Richmond and then left Richmond and retired to his handsome country residence at Springvale. Mr Jago was the Shire President of Dandenong, so just outside the Casey Cardinia region. You can read his obituary in the Dandenong Advertiser of February 5, 1914. It had this to say about his experience in the Crimean War -   At the age of 16 he was engaged as a bugler in the Crimean war, and was engaged right through the campaign, with all its hardships and privations, and later took a prominent part in the siege of Sebastopol. (Dandenong Advertiser, February 5, 1914, see here)


Place names
The battles and personalities of the Crimean War were a source of place and street names  - a prime example can be seen in the suburb of St Kilda which has a Crimea, Alma, Inkerman and Redan Streets and is near the suburb of Balaclava. The towns of St Arnaud and Sebastapol also have  a Crimean War connection. Locally there are three streets in Cranbourne with a Crimean War connection -
Codrington - Sir William John Codrington (1804 to 1884) was Commander in Chief of the British Forces in the Crimean War from 1853 to 1856.
Clarendon - George William Frederick Villiers, 4th Earl of Clarendon (1800 to 1870) was Lord Lieutenant of Ireland from 1847 to 1852 and the British Foreign Secretary on three occasions from 1853 to 1870. He negotiated a favourable outcome for Britain at the end of the Crimean War in 1856 at the Congress of Paris Peace talks. The Crimean War, which was a war between Britain, France, Turkey and Sardinia against Russia took place largely on the Crimean Peninsula in Russia.
Lyons - Admiral Sir Edmund Lyons (1790 to 1858), Ist Baronet Lyons, commanded the Black Sea fleet during the Crimean War.

I also believe that Pakenham was named after Lieutenant-Colonel Edward William Pakenham (1819 -1854) who was killed at Inkerman during the Crimean War. This has been disputed, but I stand by my research. You can read more about the naming of Pakenham, here.

Lucknow, in East Gippsland, is the only place name I know connected to the Indian Mutiny.

I have created a list of articles on Trove, on these three Crimean War veterans, you can access it here. All the articles referred to here are on the list.
Posted by Heather at 3:51 AM