November 11 is the day we commemorate the Armistice, or the end of World War One. It is also called Remembrance Day, for obvious reasons, when we remember those that died in the Great War and other conflicts.

Here are some World War One statistics from the Australian War Memorial website. In 1914, Australia had a population of about 4.9 million people - 416,809 enlisted - mainly men, but the figure includes 2,861 nurses. In fact, 38.7% of the male population aged between 18 and 44 enlisted. 336, 931 embarked for service overseas and of these 60,000 were killed and 156,000 wounded, gassed, or taken prisoner. You can see what a massive impact the War had on the population and the figures don’t count the number of returned soldiers who died prematurely from their injuries - both physical and psychological - and one estimate from the Australian War Memorial is that between 1919 and 1933 38,000 returned soldiers died.

In 1918,  the announcement of the end of the War was on a Monday and the newspapers had reports on how local communities celebrated the end of the War. The language is a bit more nationalistic and jingoistic, than what you will see in the mainstream media these days. 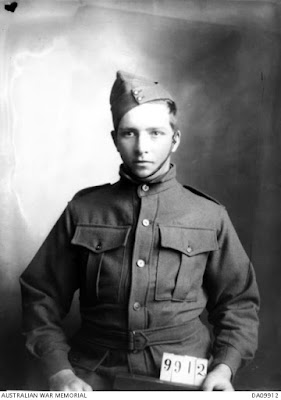 Alex Dunlop of  Koo Wee Rup. Alex was only 18 when he enlisted on May 8, 1915 and he survived the War, saw the Armistice declared and Returned to Australia March 31, 1919. His Service Number was 2811.
Image: Australian War Memorial


Koo Wee Rup -  from Koo Wee Rup Sun, November 13, 1918.
News was received here on Monday night.  It was accepted with reserve by many, who remembered former fiascos, and waited for official intelligence. Fog detonators were exploded on the line, and there was some cheering, but many people resolved, to wait till morning before getting unduly excited. Then, when the morning papers came through, it was seen that the long war was over at last, and the Huns' fangs had been drawn.

A little after ten o'clock the hall doors were thrown open, and the school children, marshalled by Mr Eason, head teacher, marched into the building, where a programme of patriotic airs was rendered, with songs by Miss Mickle, Mr E.J. Lupson and Sergeant Finck. Messrs Eason and Hopkins made suitable speeches. Mrs Townson presided at the piano. The National Anthem was sung with great fervour. ‘The Marseillaise’, and ‘Rule Britannia,’ ‘Anzacs Every One,’ ‘Soldiers of the King,’ etc. Cheers were given lustily, and a collection was taken up to give the school children a picnic during the afternoon, Mrs J. A. Mickle kindly offering the use of a paddock. A couple of returned soldiers were present, and these got an ovation. The afternoon was spent, pleasantly, with a really capital sports programme, about £3 being collected.

In the evening a dance was given, by Mr and Mrs M'Namara in honor of the victory at which there was a very large attendance. The utmost happiness was in everybody's face, and all enjoyed themselves thoroughly. Excellent music was furnished by a band from Tooradin - Miss King, (piano), E. King (cornet), and J. Glasheen (violin). Songs were rendered by Mrs Donald. Miss Jessie Coates, Messrs Lupson, Donald, and Pepper. Cr E. Simpson Hill made a speech, in which he referred to the doings of our boys at the front, and gave instances of their heroism, which were loudly applauded.

An excellent supper was provided. Considering that the social was not arranged until mid-day and that it was a postal holiday, the goods having to be ordered from Melbourne, it seemed an impossible performance to get these sent on the 1.15 p.m. train, to arrive in time for the evening's festivities. Yet it was done, reflecting great credit on Dance's, the Melbourne caterer, and Mrs M'Namara. The McNamara’s were the owners of the Royal Hotel. 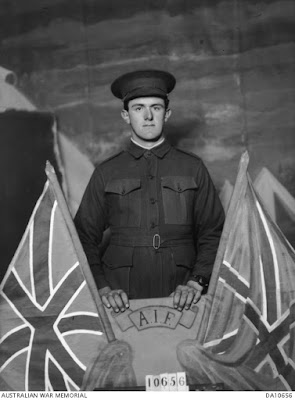 This is Robert Henry, from Yallock. Robert enlisted on July 8, 1915 at the age of 19. He Returned to Australia March 2, 1919, so he also lived to see the Armistice declared. His Service Number is 344.
Image: Australian War Memorial.


Lang Lang -  Koo Wee Rup Sun, November 13, 1918
When the news came of the signing of the armistice by Germany at 8.45 p.m. there was an expression of over-whelming joy amongst the townspeople, who soon turned up from bed and fireside. In the midst of all the jubilation there was a certain amount of sober seriousness, and also of deep sympathy for the mourners of loved ones.

It wasn't long before a town band made its appearance, and Mr E. Cougle rode round, breaking the news at front doors. Everybody resorted to the hall, where patriotic airs were sung after ‘Oh, God, our Help in Ages Past’ and ‘Praise God, from Whom all Blessings Flow.’ Rev. N. Danne, Constable Cole, Mr E. Wiseman. Mr  E. Cougle, and others made short speeches, punctuated by the band, on the platform. Everybody went home at 11.30 p.m. with light hearts and prepared to make a day of it on Tuesday in the Show Grounds, where all sorts of sports were indulged in.

Clyde  (Koo Wee Rup Sun, November 20, 1918
Great excitement was caused locally by the news that Germany had signed the armistice. The news was received here on the Monday night. Fireworks, rattling of tins, ringing of bells, etc. hailed the glorious news. On Tuesday morning the school children marched up and down the station, singing patriotic songs, to the accompaniment of the tin can band. On the Tuesday evening the celebrations were continued at the local school, which was crowded. Addresses were given by Cr. Hardy, the chairman of the School committee, Mr C. Croskell, and Mr M. Forrest, after which a bonfire, built earlier in the day, was lighted, and the various kinds of fireworks were distributed amongst the children, who imagined they were shooting imaginary Germans. After the handing round of refreshments, the singing of ‘Auld Lang Syne’ and the National Anthem brought, the most memorable day in the history of Clyde to a close.

Bunyip and Garfield
The Bunyip & Garfield Express of November 15, 1918 had a report on the end of the War, it was headlined Peace at Last, Germany Surrenders. It then had an understandably emotional report about the ‘Mad Dog of Europe’ being beaten and brought to his knees but the joy of the announcement was tempered by this statement The price of victory has been dearly won, as many thousands of our brave men have had to pay the supreme sacrifice in the struggle for liberty and the triumph of right over might.

Garfield    Bunyip & Garfield Express November 22, 1918
There were celebrations on the day of the announcement of the end of the War, which was on a Monday, as we said,  and the next day the Garfield Children paraded the streets with 50 kerosene tins, 2 drums, whistles and bells. They played in front of each shop and £3 was collected for a school flag. The next day, Tuesday, a meeting was held in Garfield and they decided to hold a monster picnic on Peace Day, to be followed by a bonfire and camp fire concert.

Peace Day was celebrated on Wednesday, November 20, 1918. The Garfield Picnic commenced at 11.00am by the saluting of the flag.  A procession marched to the recreation ground the National flag came first, carried by two returned soldiers, followed by an effigy of the Kaiser on horseback and under guard. This was followed by a field gun, manned by an up to date crew and a machine gun in charge of boy scouts.

Preminent [sic] in the procession was an aeroplane, pilot and observer. A pretty picture was a decorated cart and seated therein was the Queen of Peace (Miss O. Dawes). Practically all the children and most of the adults were in fancy dress. These were most novel and artistic and reflected credit on the proceedings.

The children were put through the various drill evolutions by Mr Hill, and the word ‘Peace’ was skilfully formed, each letter being taken by a child. The effigy of the Kaiser was hanged and left swinging all day. The ladies supplied dinner, and a program of events was run off. The events included various foot races, with Mrs Heath winning the married ladies’ race.

In the evening a concert was held in Barker’s paddock. It was followed by a display of fireworks and a bonfire. The paper concluded that the promoters are to be congratulated on the success of the function.

Bunyip    Bunyip & Garfield Espress November 22, 1918
Similar celebrations were held in Bunyip at the Show grounds.  The paper reported Not even the most sanguine could have anticipated the warm-hearted spontaneous demonstration of a thankful community, which even at this distance, has felt the grip and menace of a mighty war that has shaken the earth on its very foundations for the past four years. Many of those who assembled have not had a light heart since the war began, for someone near and dear to them had cast their chance of life into that whirlpool of death that has taken so many of our bravest and best. But now it is over and are boys are coming home, and their people rejoiced.