There was an appeal published in many local papers in 1918 to help Australia purchase 'Victory' Battleplanes*. Each Australian was asked to subscribe one pound and this would finance 370 planes. The idea was formulated by Mr C. Alma Baker, Honorary Organiser of the Australian and Malayan Air Squadrons Funds and it was published in many papers in May and June 1918. This report appeared in the Lang Lang Guardian. It has been edited, you can see the original, here.


AUSTRALIAN "VICTORY" BATTLEPLANES.
AN APPEAL TO ONE MILLION
AUSTRALIANS TO SUBSCRIBE ONE POUND EACH.
There can be no two opinions as to the great military value of aircraft in this war. Every operation is governed by them, and so greatly does the British Government appreciate public support of this arm that they have given permission to Whitehead Aircraft Ltd., England, to appeal to the public of Great Britain for funds to build battleplanes for the front.

No doubt there are many Australians who would like to give substantial subscriptions to battleplanes, but cannot afford to do so. Under my "One Pound Victory Battleplane Appeal" everyone has the opportunity of helping, and I earnestly appeal to one million Australian non-combatants to send one pound each to the honorary treasurer of the "Australian Air Squadrons Fund," Mr. F. E. Bryant, manager of the Union Bank of Australia, Pitt St., Sydney, for the credit of the "Australian Victory Battleplane Fund" to help create a fleet of 370 battleplanes.

Battleplanes presented out of the fund will bear the Australian consecutive number, and title "Victory" Battleplane No. 1 to 370 as the £2700 for each battleplane is cabled to the War Office.

This special "One Pound Victory Battleplane Appeal" need not debar those desiring to subscribe more, or families, firms, corporations, unions, and other bodies from grouping contributions, nor interfere with those wishing to give battleplanes outright, bearing desired names.

When peace is declared—who will dictate the terms?—the people of Australia, if they will, can materially help to make it a victorious peace by sending battleplanes to smash the enemy in France. If Germany is victorious, "Australia for the Australians" will be meaningless words, and free Australia of to-day will cease to exist.

Why should non-combatants let only the eligible men of Australia defend Australia and the Empire? It is the first duty of every loyal subject to do their utmost to bring this war to an early and victorious conclusion,and non-combatants cannot in any better way help to do this, than by subscribing to battleplanes. A battleplane is equal to at least 2000 men, and every pound put into one is worth a man's life. Battleplanes presented will be fighting in France within twelve weeks from the time the money is cabled to the War Office.

I again most earnestly appeal to every loyal Australian who can spare one pound to subscribe without delay to enable the 370 "Victory" Battleplanes — 23 air squadrons — a mighty fighting force—to help shatter for ever the Kaiser's schemes for world domination. Will you make one of the million to send one pound? Your battleplane, once presented, lives on; the War Office upkeeps, repairs, and replaces it, if destroyed, with original name.

My appeal to the people of Australia has the approval of the Imperial Government, and the sanction of the Federal and State Governments of Australia. All donations are to be sent to Mr. F. E. Bryant, manager, Union Bank of Australia, Sydney, and not to me personally.
C. ALMA BAKER.
Honorary Organiser Australian and
Malayan Air Squadrons Funds.

Mr Baker's appeal neatly sums up the what the Battleplane scheme was. So, how did everyone react? If you were wealthy enough then you handed over a cheque straight away. This is what Mrs Sidney Kidman did, according to a report. Mrs Kidman (nee Isabel Wright) was the wife of the wealthy pastoralist, who himself had given money for a  battleplane in 1916. (Every Week Bairnsdale, May 9, 1918)

We first found out about the Gippsland Battleplane, by accident, when a friend was looking for information on another topic, which was listed in the same catalogue record at the Public Records Office as the Battleplane. The whole concept of the Battleplane sounded bit obscure, but interesting, so we ordered the file that it was contained in - Alberton Shire Correspondence -  to see what it was about. The file included  a few lists of people who had subscribed, two newspaper cuttings and a copy of the circular that was sent around from the Gippsland Boroughs' and Shires' Development Association (see below).   This is the letterhead from the Shire for their subscription list.
Public Records Office of Victoria - Shire of Alberton, General Correspondence Files
VPRS 17453/ P1  unit 16,  item 377-383 (1); 384-386
Photo: Isaac Hermann

In Gippsland, they decided to raise money  collectively and purchase a plane to be called 'The Gippsland' -  Before the conference of the Gippsland Boroughs' and Shires' Development Association concluded, delegates decided on concerted action to give new expression to the loyalty of Gippsland. On the motion of Cr. Henderson (Rosedale), it was decided that funds should be raised to present a battle plane to the Imperial Government. It was estimated that a sum of £2700 would be required. The proposal is that the executive of the association shall circularise municipalities in the province regarding contributions. (The Age May 25, 1918)

The Municipalities were 'circularised' and given a fund-raising quota to meet and it seems that most of the Councils were keen - there are reports that Rosedale, Mirboo North, Morwell, Traralgon, Maffra and Sale all participated enthusiastically and fairly quickly raised their quota, in fact Bairnsdale raised their quota and had collected £600 beside for an additional plane (West Gippsland Gazette June 18, 1918).  And a Councillor from the Traralgon Shire Council meeting was so keen that he thought Gippsland should send two planes. (Gippsland Farmers' Journal June 7, 1918).  I have come across some of the quotas in newspaper reports: Alberton Shire - £212, Berwick Shire - £197, Maffra Shire -  £180, Warragul Shire - £156,  Rosedale Shire £156, Trararalgon Shire £125 and Mirboo North Shire - £62.

There was not universal acceptance of this initiative. Some Shires refused to participate including Berwick, Sale and Warragul. The Shire of Cranbourne was not a member of the Gippsland Boroughs' and Shires' Development Association, so did not participate for this reason. The Dandenong Advertiser of June 6, 1918  said it was a patriotic idea and then went on with this futuristic and slightly cynical vision -
but what's the matter with applying it locally? What the farmer wants is, to get his produce to market with the least possible delay, end at the lowest possible cost; and if an aeroplane can carry a few tons of bombs, why can it not be turned to profitable use by conveying the same weight of merchandise to market? Country roads would then become a secondary consideration; railways might rust; rivers would be crossed with bridges, mountains would be surmounted with ease, and the land would flow with milk and honey. But stop--the suggestion, we're afraid, is useless. Government precedent is against it. The much-badgered P.M.G. has already declined to utilise aeroplanes for the conveyance of mails; and the cookies will no doubt consider that '"the time is not yet ripe" to take to the air. But some day there will be a battle royal between aeroplanes and waggons, and the planes will end. You bet!

Some rate payers were also unhappy about their Council spending money on Battle planes - as this reported conversation at the Traralgon Council meeting attests -
Cr. Pettit remarked that on coming to the meeting a lady said to him that she supposed the council would vote £125 for a battleplane, but she could not get a road to her place.
Cr. Pentland: Perhaps the Germans will make the road if the Allies lose the war.
Cr. Clarke: You can promise her a ride in the first battleplane.
(Gippsland Farmers' Journal July 15, 1918) 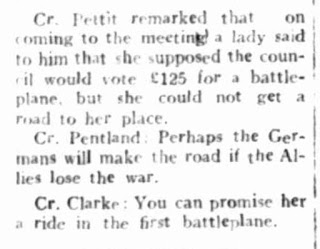 Some rate-payers of the Traralgon Shire objected to their Council donating to the Battleplane.
Gippsland Farmers' Journal July 15, 1918     http://nla.gov.au/nla.news-article88057574

However, the patriotic desire of the Councils and many individuals came to an end in early July 1918 when the Commonwealth Government vetoed the idea - In making this announcement, the Minister of Repatriation said that the noises prompting Mr. Baker's patriotic and sustained effort, were both recognised and appreciated by the Australian public, and also by the Imperial authorities. In a communication to the Commonwealth Government, the latter had indeed expressed themselves in terms of the highest appreciation. They had however pointed out that the British Government had placed all the orders which the aeroplane factories could execute; and consequently the donation from Australia, did not result in additional aircraft being built. (West Gippsland Gazette July 9, 1918) 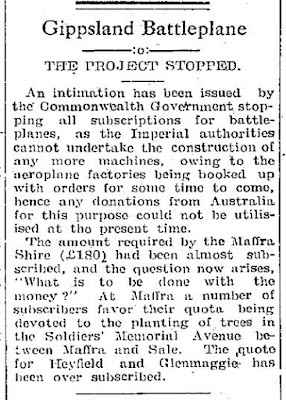 What happened to the money that was already raised? The only report I could find was that the money collected at Maffra would be used to plant a Soldiers' Memorial Avenue. (Koo Wee Rup Sun July 24, 1918)

I have created a list on Trove of articles relating to the Gippsland Battleplane, you can access it here. all the articles referenced here are on the list.