I came across this article in The Herald with the headline - Footscray Family Produces Nine Men for Ranks. As it turns out four of the sons were born in Bunyip and some of the children also went to school in Bunyip. These men were the family of John and Annie (nee Whelan) Fisher. They were the parents of twelve children born between 1881 and 1898, the ten boys listed below and two daughters, Theresa and Catherine. The family had their story written up in The Herald of May 27, 1916 (see it here) It is transcribed below, in italics. Eight of their sons enlisted in the A.I.F, one son had poor eye sight so was not accepted.  Their eldest son, had enlisted in a Scottish Regiment years before and had been killed, but his son, John,  had enlisted in Melbourne to fight along side his eight uncles. I have added their Service Number (SN) so you can look up their full record on the National Archives, www.naa.gov.au 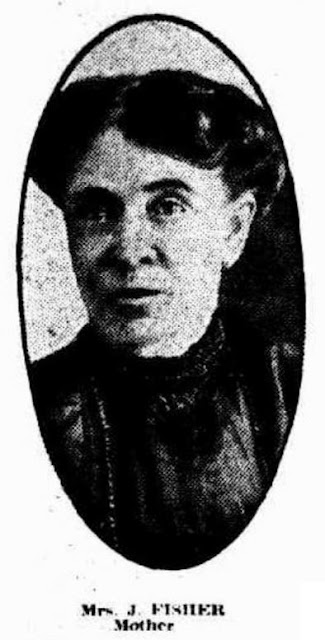 The article has a photos of all the Fisher boys, and this photo of their mother, Annie, who deserves a medal for giving birth to twelve children and having the heart break of three of her sons dying due to fighting for their country.
The Herald May 27, 1916 http://nla.gov.au/nla.news-article242326933


A remarkable record of enlistments is claimed by the family of the late Mr. John Fisher, formerly of Bunyip, Gippsland, and Mrs. Fisher, of 2 Newell street, Footscray. Eight of their sons enlisted and a ninth has been rejected.

The eldest son, John, was a lieutenant in the Scottish Regiment, but was killed many years ago, leaving a son, who is now at the front.

Staff sergeant - major, Edward Fisher, the eldest son, is now in the Broadmeadows camp. He was born Kangaroo Flat, Bendigo, and later attended school at Bunyip, Gippsland. He was a member of the Fourth Contingent in the South African War, under Colonel Kelly, and gained a Distinguished Conduct Medal. His wife and children live at Essendon. Edward (SN 6765)  Returned to Australia July 24, 1919. 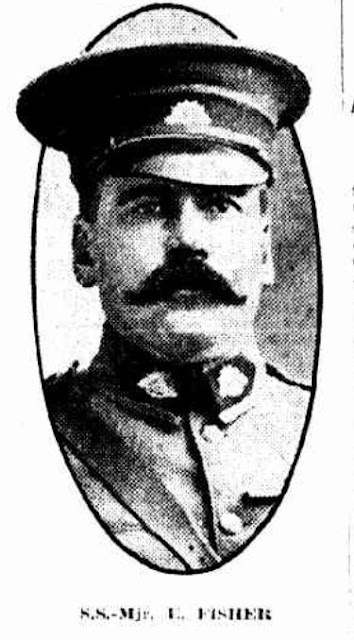 Lieutenant Walter Fisher was the next son, and he is now at Broadmeadows camp. He was formerly a color-sergeant in the 5th Australian Infantry Regiment, and won the battalion badge for shooting and the company's badge five yearn in succession. His is the only name on the merit-hoard of the company. He enlisted as a private on September 24, 1914, in the 7th Battalion, and was promoted lieutenant at Gallipoli. He commanded the battalion in the battle of Lone Pine. In the first landing he was wounded in the arm, leg and side, but returned to the firing line after four weeks' absence. At Lone Pine he was again wounded in the right arm, the bone being partly shattered. He was buried at Steel's Post, Gallipoli, in July, 1915 through the bursting of a high explosive shell, and it took 20 minutes to dig him out. In the following week he had a similar experience. He was invalided home  on August 20, being discharged as unfit, for further, service. His wife and five children live at Frankston. Walter was born at Kangaroo Flat, he Returned to Australia March 20, 1916.

Sgt James Joseph Fisher is now in Wandsworth Hospital, London, having been wounded in Galllpoli in the Lone Pine attack. He is married, 30 years of age, and his wife and five children live at Sunshine. James (SN 1621) was born in South Melbourne and Returned to Australia in August 1916 and discharged on medical grounds in March 1917 and died June 29, 1919.

Sgt.-Major Terence Rufus Fisher, 38, is married, and has a wife and four children. He is an engineer, and lived in Milton street, West Melbourne. He is in camp, being a member of the Pioneer Battalion. Terence (SN 1502) was born in Bunyip. He Returned to Australia June 12, 1919.

Mr Robert Fisher, 36, married, of Footscray, has made five efforts to enlist, but has failed to pass the sight test. He is the only living boy in the family that has not enlisted.


Cpl. Martin J. Fisher, 24, single, was killed at Lone Pine. He was shot through the thigh on the day of the landing, and returned to the firing line five weeks later. He was a first-class shot and was selected as one of five battalion snipers. He was a member of the Coburg Harriers, and lived at Sunshine where he worked as a carpenter.  Martin (SN 439) was born in Bunyip. 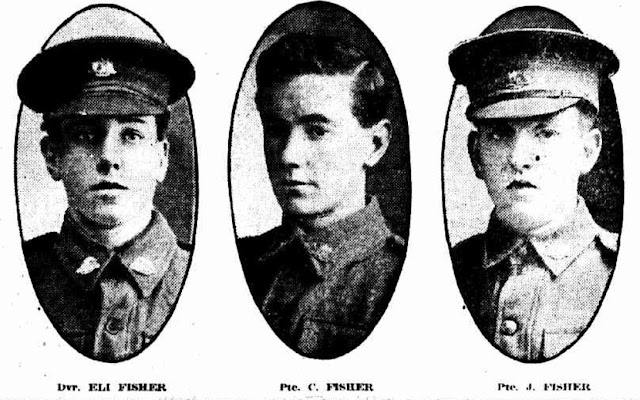 Private Cecil Fisher, 18, is in camp at Broadmeadows. Cecil (SN 2742A) was born in North Melbourne. He was awarded the Miltary Medal and  Returned to Australia December 18, 1918.