The centenary of World War One has not only been a time of reflection but has been an opportunity to create new memorials, especially on-line memorials, to commemorate our soldiers. One such new memorial is the Caulfield Area Memorials website http://www.caulfieldareamemorials.org
This website, which is still  a work in progress,  covers  Great War Memorials in Glen Eira, Caulfield, St Kilda, McKinnon, Bentleigh and Murrumbeena. You can see the list of memorials covered by this website, here. The website partners are the Caulfield RSL, the Glen Eira Honour Roll project and the Brighton Cemetorians. 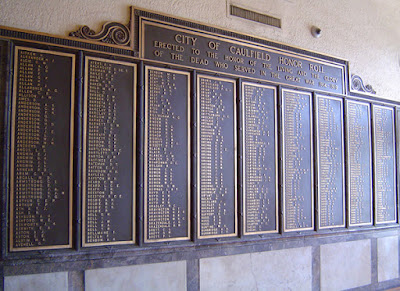 The City of Caulfield Honor Roll. The Roll was officially unveiled  February 25, 1931.
www.gleneira.vic.gov.au

Even though these towns are outside the Casey Cardinia region some of our soldiers have links to these area, here are a few examples. SN stands for Service Number.

Frank McNamara is on the Caulfield Town Hall Honour Roll as his family home was Royal Parade, Caulfield. Frank, however, was a teacher at Koo Wee Rup North State School when  he enlisted. In spite of this, he was not listed on the Koo Wee Rup North State School Honour Board
Frank was awarded the Victoria Cross, one of only 64 awarded during the Great War to Australians, so he was a remarkable man. You can read more about him, here.

Louis Andrews (SN 4493) is in the database and was living in Glenferrie Road in Malvern when he enlisted. After he served overseas he resumed his occupation of printer and lived at Noble Park. He is buried at the Brighton Cemetery and the Brighton Cemetorians (the 'Friends Group' of the Brighton Cemetery) are involved in this database project, as many of the soldiers listed are buried there. Louis came from a pioneering Hallam family, being the grandson of John and Bridget Andrews, who settled in Hallam in 1854. You can read about them, here.

Alfred Scharf (SN 962) and Richard Scharf  (SN 7961) have trees in the Brighton Avenue of Honor - Richard's tree was in North Road and Alfred's tree in Point Nepean Road (Nepean Highway). Their parents, Henry and Liselle had lived on Finck's Road in Yallock, but were living in St Kilda Road in Elsternwick when the boys enlisted. Sadly, neither of the boys returned home - Alfred was Killed in Action in France on August 24, 1916 and Richard Died of Wounds received whilst fighting in France on May 1, 1917. The boys are also on the Yallock Honour Roll, you can read about it, here. The State Library of Victoria has digitised the memorial booklet which lists all the names on the City of Caulfield and Town of Brighton Avenues of Honour, you can see it, here. 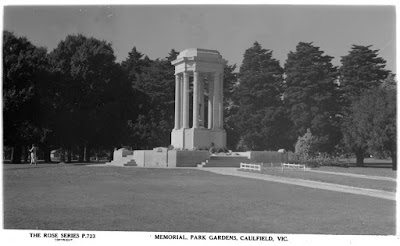 
Bert Keddie (SN 4833) and Thomas Keddie (SN 856) are on the Honour Roll at the Caulfield Town Hall and the Caulfield War Memorial in Caulfield Park. They are also both on the Nar Nar Goon North State School Honour Roll, read about this, here. Their family home was in Toward Street, in Murrumbeena. The boys were both school teachers when they enlisted, one at Ouyen and one at Byaduk. I don't know the exact connection to Nar Nar Goon North - their brother,  Richard James Keddie, was  a teacher at Nar Nar Goon in in 1909-1910 so he  maybe the connection. The boy's parents are James and Jane - James is listed in the Electoral Roll as being a Railway employee - so he may have worked at Nar Nar Goon and the boys went to school there. Not sure.

Arthur Charles Murdoch (SN 2634) is listed on the Caulfield RSL Roll. Arthur was born at Iona but was living in Brighton at the time of his enlistment on October 29, 1917.  George Murdoch, his father,  owned the Cora Lynn store from 1907 until 1922. Arthur is also on the Cora Lynn War Memorial.

This is, as I said before, a work in progress, so if you would like to volunteer or submit information then click on this link -
http://www.caulfieldareamemorials.org/about-the-memorial-database/submitting-information
Posted by Heather at 6:29 PM