A Century After the Guns Fell Silent: Remembering the Pakenham District's WWI Diggers 1914-1918

On Sunday, November 11, 2018 Patrick Ferry launched his book on the men and women from the Pakenham area who served in the Great War. The book is called A Century After the Guns Fell Silent: Remembering the Pakenham District's WWI Diggers 1914-1918. A limited edition of 250 copies of the book was produced courtesy of a Centenary of the Armistice Grant from the Department of Veterans' Affairs. However, you can also access the information and download  a free copy of the book on this new website  https://www.pakenhamww1.com/

Patrick spent many hours talking to family members of the soldiers - sometimes it was easy to track down relatives as their family still lived in the area, at other times a fair bit of detective work went into finding family members, some of whom had no idea that their Digger was listed on a memorial in the Pakenham area. This has all resulted in a book with family photos and personal insights in the soldiers and their life after they returned home. The book was also produced with the assistance of members of the Berwick Pakenham Historical Society.The book and website is a great contribution to the history of our area and a tribute to the sacrifice that so many local families made to support Australia during the Great War. 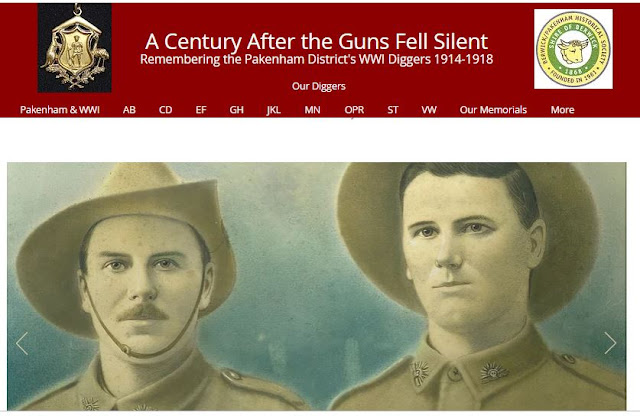 Screen shot of the website showing two of the Ellett brothers of Pakenham South
Posted by Heather at 3:47 PM