In this post, in our series of Brothers who enlisted, we are looking at the Gabbett brothers who had an association with Garfield and Pakenham. Edward (b. 1880),  Ernest (1882) and Norcliffe (1896) were the sons of John Norcliffe Gabbett and Marion Auriol Lintott. There were also three daughters - Annie Auriol (1885) possibly a Denise (b. c. 1885) and Eda Marion (1892). John and Marion were married in Buln Buln in 1879 and the marriage notice in The Argus of December 29, 1879  states that he was the second son of the late Major R.P Gabbett, Royal Artillery, and she was the only child of Edward Lintott, Esq. Marion's parents were pioneers of the Brandy Creek (Warragul) area and in her father's obituary it said that the name of Captain Lintott could not be disassociated with that of Brandy Creek. You can read his obituary in the Warragul Guardian, here. Marion's mother came from equally illustrious stock, you can read her obituary in the Warragul Guardian, here.  Edward Linnott's obituary said that Marion's husband was Captain Gabbett of the Mounted Rifles.

What else do we know about Captain Gabbett? He resigned his commission in the Victorian Mounted Rifles in November 1889 and the same year he was appointed Deputy Registrar of Births and Deaths in Drouin. In 1902 he was appointed as a Commissioner for taking Declarations and Affidavits at Toora. In September 1904, Captain Gabbett, went missing. He was on a fishing excursion and when he went to board the boat in the evening, it is believed that he slipped and possibly hit his head. A search was undertaken but his body was not found - I couldn't find an Inquest record or a death registration, so it's all a  bit of  a mystery. As for Marion, in 1926 she married Henry St Leger Skinner and died at the age of 90 in 1943.

By now you are probably thinking - what is the  Casey Cardinia connection? Here it is - Marion and her son Norcliffe were living in Pakenham when he enlisted. As well, son Ernest and his wife Eveline are listed in the Electoral Rolls at Garfield in 1914, his occupation was merchant, Marion was also listed at Garfield. They must have moved to Pakenham around 1914 and opened a drapers shop which Eveline operated when her husband was away at the War.   In 1919 Ernest and Eveline are in the Electoral Roll at Pakenham - his occupation is a tailor and Eveline was listed as a draper.

Gabbett, Edward Norcliffe (Service Number 845) Edward was 34 years old when he enlisted on July 8, 1915 and  his next of kin was his wife, Lilian, of Stratford. His occupation was Agent. Edward was wounded in action - gun shot wound to left leg - and had to have the leg amputated. He was sent back to England for recuperation and Returned to Australia November 25, 1917 and was medically discharged. In spite of this set back he lived until the age of 91 and died in 1972.

A report of the return of Ernest Gabbett, whose wife has conducted a drapery business here [Pakenham] during the greater part of Mr Gabbett's absence with the A.I.F abroad. 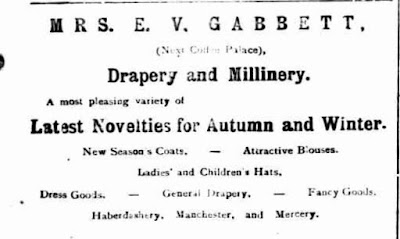 Gabbett, Ernest Poole (SN 2846) Ernest was a 32 year storekeeper when he enlisted on August 25, 1914. His next of kin was his wife, Eveline. He was wounded in action - shot in the arm - and after a time spent recuperating in England he Returned to Australia October 7, 1918. Ernest also lived to a good age and died in 1962 aged 80. 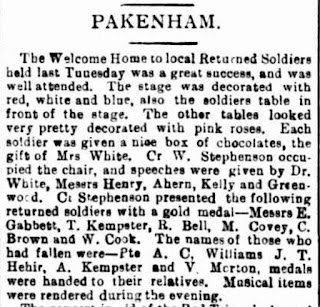 
Gabbett, Norcliffe Esca (SN 1167) Norcliffe was only 18 when he enlisted on March 15, 1915. His next of kin was his mother of Pakenham.  Sadly, only 8 months after he enlisted Norcliffe Died of Wounds on the Gallipoli Peninsula on November 5, 1915.  I have called him Norcliffe, but he seems to have been known as Esca and he is listed on the Drouin State School Honor Roll as Esca Gabbett. You can see the list of names from this roll, here.http://nla.gov.au/nla.news-article136653646 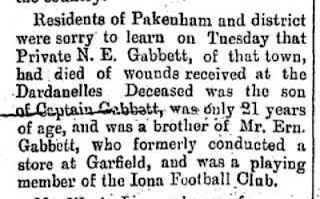 A report of the death of Norcliffe Gabbett