The family had been market gardeners in Springvale, before they came to Pakenham South and all the children were born there (although the births were registered in Oakleigh). According to the book Look to the Rising Sun: a history of Cardinia and District* the Ellett family  operated the Post Office and store and were involved in many community groups and activities. 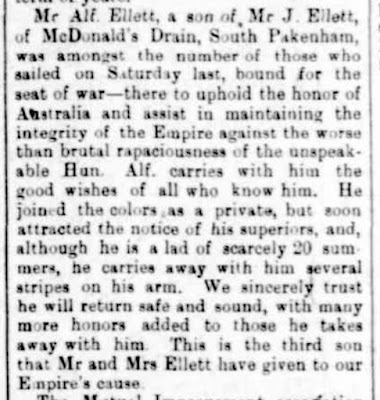 A report on Alf's enlistment to fight against the brutal rapaciousness of the unspeakable Hun. Alf was the third son the Ellett's had given to our Empire's cause.


Ellett, John Alfred (SN 2773) Called John (or Jack as he was called in a newspaper report) enlisted on December 14, 1914 at the age of 20. He was also a farmer. Jack had been wounded whilst serving - gun shot wound to the right thigh - and had also suffered from Enteric Fever (typhoid).   Jack Returned to Australia December 3, 1918

Ellett, Robert Henry.  Robert, or Bert as he was called, enlisted twice firstly on October 20, 1914 (SN 2772) at the age of 26 and secondly on April 18, 1916 (SN 2407) The first time he enlisted he was sent overseas but Returned to Australia December 4, 1915 and was discharged on medical grounds in March 1916 - amongst the conditions mentioned were deafness, rheumatism and asthma. Bert then re-enlisted on April 18, 1916 and was wounded in action - gun shot wound to the right arm - and was  discharged again on medical grounds on December 12, 1917. Bert was granted a Soldier Settlement farm, you can read his file here, on the Battle to Farm website. 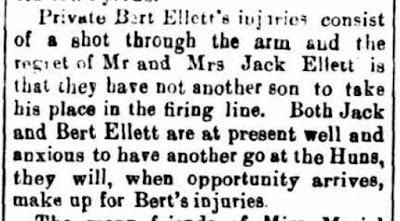 The Ellett's were clearly a patriotic family - in spite of the fact that both Bert and Jack had served overseas, been badly wounded, they still wanted to have another go at the Hun. 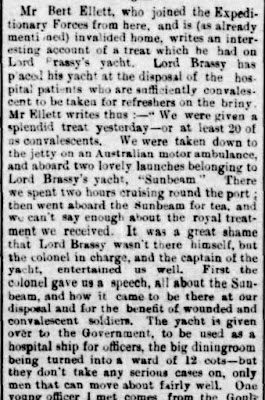 This is part of  a letter Bert wrote home, which was published in the
South Bourke & Mornington Journal of November 11, 1915. It was an account of  trip on Lord Brassy's yachh, which he had made available for wounded soldiers.
You can read it in full here http://nla.gov.au/nla.news-article66188785

*Look to the Rising Sun: a history of Cardinia and District including Rythdale and Pakenham South by Eileen Williams and Jewel Beard (Back to Cardinia Committee, 1984)
Posted by Heather at 4:18 PM