In the fourth year of the War there was still a need of new recruits as this article in the Pakenham Gazette of February 8, 1918 reports. However, some people were of the opinion that the Australian authorities were too fussy and that a man must almost have the physique of a trained athlete to be accepted for service.

Recruits Wanted
With a view to getting recruits it has been decided to hold a number of meetings throughout the electorate of Flinders, of which Pakenham forms part, and Sir William Irvine is to be asked to address several of these meetings. Unable, in view of the immediate necessity of raising fresh drafts of troops for overseas service, to allow the existing position in regard to recruiting to continue indefinitely, the Government is now engaged in formulating a new plan of action (says the "Age").

With men so urgently needed, it is only to be expected that the authorities will thoroughly overhaul the existing  recruiting machinery. At the present time an exhaustive examination is being made of all records dealing with the rejection of enlisted men for alleged physical defects. It is a well known fact that thousands of men have been sent back to Australia from England without ever having heard a shot fired, the reason given being that the men were not considered physically capable of standing the strain of field service. 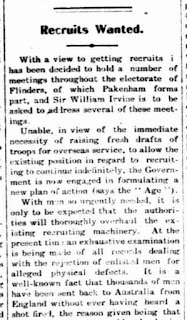 In some quarters it is felt that the A.I.F. medical authorities in England have been far too severe in the medical tests applied to men prior to their embarkation for France. One effect of their action, at any rate, has been to raise to an extraordinary high pitch the medical standard applied to volunteers in Australia, as, naturally, the Authorities here were not prepared to accept men who, after costing the country some hundreds of pounds to train, might be promptly rejected by the Australian army medical authorities in England. So strict have the authorities in the Commonwealth now become that it is stated that a man must almost have the physique of a trained athlete to be accepted for service.

The Director General of Recruiting has publicly expressed his opinion that the matter requires investigation, and the claim which he makes would seem to be supported by the fact that dozens of Australians who have been refused enlistment in Australia have gone home to England at their own expense and been accepted for service by the British authorities.

You can read the article here
Posted by Heather at 9:56 PM

Email ThisBlogThis!Share to TwitterShare to FacebookShare to Pinterest
Labels: Recruiting