After the First World War the Education Department of Victoria published a book called The Education Department's Record of War Service 1914-1919. There were two teachers listed who had taught locally and they had both been at Koo Wee Rup North State School. By coincidence, both of them were awarded medals for bravery - Captain Frank McNamara received the Victoria Cross and Captain William Wilson received the Military Cross. There were 64 Victoria Cross medals and around 2,400 Military Cross medals awarded in the First World War. The Koo Wee Rup North State School opened in July 1894 and closed in November 1959.

What follows is the extract and the photos from The Education Department's Record of War Service 1914-1919 book on the two soldiers.* 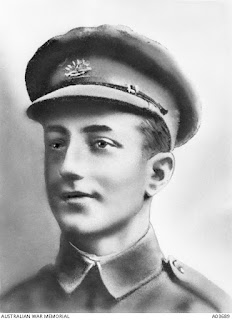 Captain McNamara was the son of Mr. F. McNamara of ‘Moondyne’, Royal Parade, Caulfield.  On 2nd August 1915, he was selected with seven other officers of the Permanent and Citizens Forces for the third course in Military Aeronautics at the Central Flying School at Point Cook.  Officers so trained were then due to be attached to the Indian Army for duty in Mesopotamia.  The Commonwealth, however, offered to form a complete squadron, and this offer was accepted by the Imperial Authorities.  The squadron was formed in January 1916, and it sailed on the Orsova on the 16th of March.  He disembarked at Egypt on 24th of April, and on the 28th of the same month proceeded to England for training.  He returned to Egypt on the 28th of August, and joined No.1 Squadron at Heliopolis.  On 21st of October, he joined the 67th Squadron at Kantara.  On 20th of March, 1917 he was wounded in action, and was evacuated to the hospital at Abbassia.  Later, he was promoted Captain and Flight Commander of the 71st Squadron, and served in Sinai and Palestine.  He returned to Australia as an invalid on the transport Boorara on the 27th of September.
Deed for which the Victoria Cross was awarded – ‘For most conspicuous gallantry and devotion to duty during an aerial bomb attack upon a hostile construction train, when one of our pilots was forced to land behind the enemy’s lines.  Lieutenant McNamara, observing this pilot’s predicament and the fact that hostile cavalry was approaching, descended to his rescue.  He did this under heavy rifle-fire, and in spite of the fact that he himself had been severely wounded in the thigh.  He landed about 200 yards from the damaged machine, the pilot of which climbed on to Lieutenant McNamara’s machine, and an attempt was made to rise.  Owing, however, to his disabled leg, he was unable to keep his machine straight, and it turned over.  The two officers, having extricated themselves, immediately set fire to the machine, and made their way across to the damaged machine, which they succeeded in starting.  Finally, Lieutenant McNamara, although weak from loss of blood, flew this machine back to the aerodrome, a distance of 70 miles, thus completing his comrade’s rescue.’ Prior to enlisting, he was teaching at School No. 3198, North Koo-wee-rup.

Captain McNamara was the first Australian Airman to receive the Victoria Cross. He was born in Rushworth in 1894, the son of William McNamara and Rosanna O’Meara. He attended Shepparton Agricultural High School. In 1924 he married Hélène Marcelle Bluntschli of Brussels whom he had met in Egypt during the War and they had two children. After the War he served with the newly formed RAAF and was the Officer in Command at the Flight Training School at Point Cook and later at the RAAF base at Laverton. In World War Two he was promoted to Air Vice Marshall and, in 1942, moved to England where he worked with the RAF. Captain McNamara died in England in 1961. There is a bust of Frank McNamara in Rushworth and even though he only had a short connection to Koo Wee Rup, I am claiming him as Koo Wee Rup’s VC recipient! 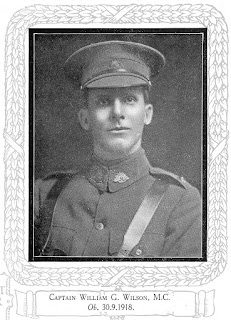 Killed in Action on 30th September, 1918. Captain W.G Wilson, M.C., late head teacher at Koo Wee Rup North. His widow, Mrs Lilias Wilson, lives at ‘Whroo’ Tooronga Road, East Malvern. William George Wilson was born on 19th September, 1882. He became a junior teacher at Moora South in 1901 and was head teacher at Lalbert Road from 1905 to 1908, then at Harrow till 1911 and at Koo Wee Rup North till 1912. He was an excellent teacher. In 1909, he received an official letter expressing the Director’s appreciation of the good work he was doing, and the success that had attended his well-directed and zealous efforts to secure the whole-hearted co-operation of parents and pupils. He enlisted in June 1915 and proceeded to camp early in July. After serving about six months and passing successfully through the Officers’ Training School, he obtained his commission. He embarked for Egypt on the 7th of March,1916. After spending some four or five months in Egypt, he embarked for England on the 29th of July 1916, going through France. He was Instructing Officer in the 14th Training Battalion for some time, and was chosen with other Australian officers to attend a three weeks’ course at Chelsea Barracks, London.  He passed the examinations successfully. On the 4th of November he embarked for France and was serving on the Somme some months when he contracted trench fever. After two weeks in hospital, he again rejoined his Company, and was in the line till the 24th March, when he crossed to England and was in hospital for four weeks, suffering from another attack of trench fever. Until the 4th of November, 1917 he remained in England, training and embarking reinforcements for France. On that date he again returned to France and was there in the line for a few weeks until he was prompted Captain (28h November).  He remained in line as officer in command of A Company. On 28th July 1918 he led his company so successfully through an engagement that he was awarded the Military Cross. The following is an account in the London Gazette of the deed for which he was awarded the Military Cross - ‘For conspicuous gallantry and initiative. He led his company forward during an attack with great judgement and skill, under heavy fire. Though there was a gap of several yards between his flank and the unit on his left, he pushed on and reached the objective with very small casualties. His courage and splendid example of determination materially contributed to the success of the operation’.

*I am indebted to Polly Freeman, of the Cranbourne Shire Historical Society for bringing these two men to my attention.