On May 24, 1923 the Fallen Soldiers Memorial Hospital was opened in Station Street, Koo Wee Rup. It was opened by the Shire President, Cr E.Simpson Hill. The Hospital could accommodate medical, surgical and midwifery patients. This Hospital replaced the Bush Nursing Hospital in the town which had opened in  July 1918. The Fallen Soldiers Hospital was replaced in 1955 by the Western Port Memorial Hospital, which was built in Rossiter Road. 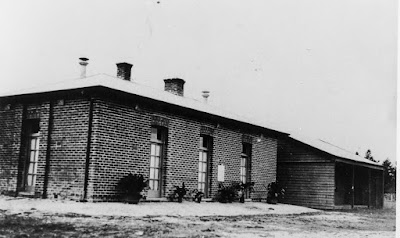 When the Fallen Soldiers Memorial Hospital was opened, a plaque was unveiled to honour the 'fallen soldiers' and this plaque is now at the old hospital now known as the Koo Wee Rup Regional Health Centre. 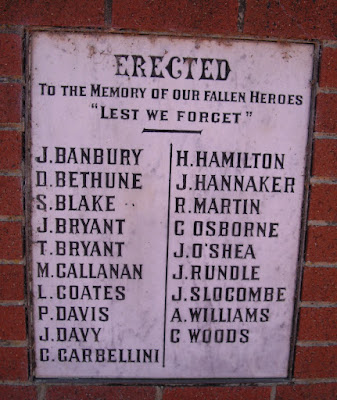 Who were these soldiers? What follows is a list of the soldiers with their Service Number (SN) so you can look up their full service record on the National Archives of Australia website, www.naa.gov.au

Bambury, Jacob (SN 762) Jacob was a 28 year old labourer when he enlisted on March 15, 1915. His next of kin was his brother Charles of Bayswater. Jacob was Killed in Action in France on July 19, 1916. What was his connection to Koo Wee Rup? That's  a good question and I have no idea. He is the only Bambury to have  died in the War and there are no Banburys that died in the War, and that is why I believe that Jacob is the man on the plaque. Jacob was the son of George Bambury and Harriet Simmonds or Simmons and their eight children were all born around Scoresby or Bayswater.  If you have any information on J. Banbury or J. Bambury, then please let me know.

Blake, Sydney (SN 6958) Sydney was a 21 year old farmhand when he enlisted on October 18, 1916. His address was care of Mrs H. Davies of Koo Wee Rup. He was an orphan and his next of kin, his sister Kathleen, was was a nurse at the Mental Hospital in Kew.  Sydney Died of Wounds on October 4, 1917 - he had received multiple gun shot wounds. Mrs H. Davies is I believe, Helen Davies (nee Mathison), listed in the Electoral Rolls at Koo Wee Rup along with her daughter Elizabeth Myra Davies (born 1891)

Bryan, Edward John (SN 1128)   Listed as J. Bryant on the plaque, so presumably known as John. John was 21 when he enlisted in January 23, 1915. He was a farmer.  John died of disease on August 26 1918 - malignant malaria and acute atrophy of the liver.
Bryan, Thomas (SN 1709) Thomas enlisted at the age of 19 on November 6, 1914. His occupation was farm hand. He was Killed in Action at Gallipoli on June 24, 1915.
John and Edward were brothers, the sons of Edmund and Margaret Bryan of Pakenham South. John had his mother listed as his next of kin and Thomas had his father as next of kin.  Margaret (nee English) died 1918 aged 56 at Pakenham and Edmund was living at Longwarry when he died in 1937.  There is a fair bit of confusion at to whether the surname is Bryan or Bryant - the boys  enlisted as Bryan, Margaret and Edmund are in the Electoral Roll as Bryan - although they are listed as Pakenham East not Pakenham South and Thomas had Pakenham East on his enlistment paper - in spite of all this I still believe that John and Thomas Bryan are actually the men listed on the Memorial plaque.

Callanan, Michael Joseph (SN 2583) Michael enlisted on June 24 1915, he was 24 and the son of John and Lizzie Callanan of Koo Wee Rup. He had attended Five Mile (Koo Wee Rup North State School) Michael Died of Wounds received in France, on December 3, 1917.

Davis, Percy (SN 96)  Percy enlisted on February 28, 1916. He was a 21 year old motor mechanic and had been working at McLeod Brothers in Sale, where he did his apprenticeship.  He was Killed Action in France on August 31, 1918. Percy's next of kin was his father, Charles of Koo Wee Rup,

Hamilton, Henry Campbell (SN 4719) When Henry enlisted on January 14, 1916 at the age of 39 his occupation was 'Manager, General Store' and his next of kin was his 'friend', Miss O'Riordan of Koo Wee Rup. Miss Margaret O'Riordan soon became his wife as they were married on January 29, 1916 at the Catholic Church in Koo Wee Rup and they had one child together, a little girl called Mary. Henry was listed in the 1914 and 1916 Electoral as a 'horse trainer'  so I assume that he managed O'Riordans store, so did he get that job when he became sweet on Miss O'Riordan or did he get into the family business after they started going out? Perhaps being the manager of a general store provided a more consistent income than being a horse trainer. Henry Died of Wounds on October 8, 1917.

Martin, Charles Richard  (SN 3197) Richard enlisted on October 18, 1916, aged 32. He was a farmer from Koo Wee Rup and his next of kin was his brother, Isaac, of Harford in Tasmania, which was also where Richard was born. Richard was Killed in Action in France on April 4, 1918.

Osborn, George Sydney (SN 2933)  Although listed as C. Osborne on the memorial plaque, I believe this is actually George who enlisted at the age of 21 on October 3, 1916. He was from Koo Wee Rup and his parents were George and Mary Osborn. George Died of Wounds on November 6, 1917. Osborn Road between Koo Wee Rup and Bayles is named after the family. George's brother Percy was a cyclist of some note and competed in the 1928 Tour de France with  Hubert Opperman, Ern Bainbridge, and Harry Watson.

Rundle, James  (SN 4758) James was a 31 year old Theatrical Agent when he enlisted on September 24, 1915 - not an occupation you see listed very often. His next of kin was initially his mother,  Jessie McDonald Rundle, of Koo Wee Rup and later his wife Margaret.  James Died of Wounds on November 14, 1916.

Slocombe, Bernard Griffiths (SN 6592) Listed as J. Slocombe but I believe that this is Bernard Slocombe who was a 22 year old farm hand when he enlisted on March 6, 1916.  His next of kin was his wife, Margaret, from Koo Wee Rup, although she had various addresses listed at various times many up in the Buchan area, which is where Bernard was born.  Bernard was Killed in Action in France on October 4, 1917.  Margaret (nee Hopkins) then married Arthur Edwin Charman  in 1920, at one stage before her marriage to Arthur her address was c/o Mr S Charman of Koo Wee Rup. This was Stephen Charman, the father of Arthur and Margaret's uncle and thus her second husband was her first cousin (not so unusual for those times)

Here's some Charman family history - Stephen Charman was an early settler in Mordialloc (Charman Road is named after the family) He and his first wife, Harriett,  had arrived in Victoria in 1842. Harriet died and in 1852 Stephen married Mary Ann Gettens nee Rees, a widow with five children. Stephen and Mary Ann had a number of children together including Stephen Herbert Charman born in 1856 and Frances Maria Charman born in 1857.  Stephen Herbert Charman married Mary Ward in 1875 and had a number of children including Arthur Edwin in 1886. Frances Maria married William Hopkins in 1895 and had (amongst others) Margaret born 1897, the wife of Bernard Slocombe. The City of Kingston local history website has more information on the Charman family
http://localhistory.kingston.vic.gov.au/htm/article/323.htm 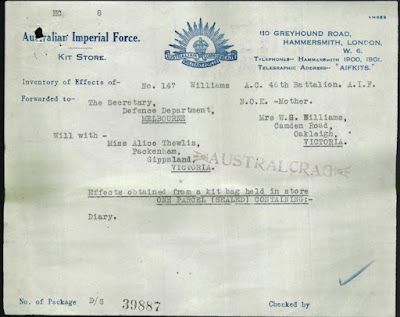 What was his Koo Wee Rup connection? His Roll of Honour circular that the family filled out has Koo Wee Rup listed as the answer to the question 'With what town or district in Australia was his name chiefly connected?' so clearly the family had some connection to the town. The same form says his step father 'but regarded as his real father' was a retired State School teacher, so he was possibly a teacher at Koo Wee Rup. Arthur was born in Stawell, his real father was Joshua Whitby Carter and his mother had married his step father in 1894 - so I don't feel that Joshua was the Koo Wee Rup connection.  In Arthur's enlistment papers it says that his Will was with Miss Alice Thewlis of Pakenham.  Was Alice his girl friend or financee?  Alice (born 1893) was the daughter of James and Susannah (nee Young) Thewlis who had arrived in Pakenham from Euroa around 1912.  Her brother Syd Thewlis was later a Shire of Berwick Councillor. So I am assuming that Arthur farmed in the Pakenham/Koo Wee Rup area and that Alice was his girlfriend.

Woods, Charles Gordon (SN 2252)  Charles was a 20 year grocer when he enlisted on April 14, 1915 - four months later he was Killed in Action at Lone Pine on the Gallipoli Peninsula - the date was listed as August the 8th or 9th, 1915. His next of kin was his father, Charles, of Essendon. Charles' connection to Koo Wee Rup is explained in this article which appeared in the Lang Lang Guardian of September 22, 1915. It's a bit hard to read, so I have transcribed it, below.

Amongst the Fallen - Private Woods
We deeply regret to record the death in action at the Dardanelles of one of our Koo Wee Rup boys, Pte Charles Gordon Woods, son of Mr & Mrs C. Woods of Essendon and nephew of Mr and Mrs Stephens of Koo Wee Rup and Mr and Mrs Christin of Dalmore. He offered his services about six months ago and was not then accepted, but shortly afterwards, again offered himself and was passed.  He was in camp at Broadmeadows and was afterwards transferred to Seymour, in the 7th Battalion, 6th Reinforcements. He left for Egypt in June and in a letter received from him, dated July 14, he gave a very interesting description of his travels in that land. Again in a letter dated 30th August he mentioned he was sailing for the Front on September 1st so that he could not have been at the Front more than two or three days when he fell for his Country. After leaving School he went to work in The Age office but this did not agree with his health and about four years ago he came to his uncle, Mr Stephens at Koo Wee Rup for whom he worked up to the time he enlisted. He is the first local soldier who has fallen in his country's cause and deep feelings of regret have been expressed by his large circle of friends.

Some of the information in the article does not tally  with the facts in his service record, but that is to be expected with communications of the era. Charles, born 1894,  was the son of Charles Woods and Minnie Margaret (nee Hazlett). Minnie died the year after her son was born in 1895.  Charles' uncle and aunty, Mr and Mrs Stephens, were Arthur William Stephens and his wife Frances Edith (nee Hazlett) - Charles was a storekeeper.  The other uncle and aunty, Mr and Mrs Christin,  were actually Samuel Kerr Christie and his wife Rebecca Evelyn (nee Hazlett) - Samuel was a farmer of Dalmore.