The second Conscription Referendum took place one hundred years ago December 20, 1917. The question asked was 'Are you in favour of the proposal of the Commonwealth Government for reinforcing the Commonwealth Forces overseas?' The result was1,015,159 in favour and 1,181,747 against*  The Referendum was in response to the a decline in volunteers and requests from the British Government to supply more troops. This was the second referendum on the issue of compulsory conscription that would have seen the conscripts serve overseas. The first one was on October 28, 1916 and it was also defeated and after these two defeats the  Prime Minister, William Morris Hughes, did not try for the third time.

Here's a few local reports about the 1917 conscription debate. There were more reports and longer reports on meetings favouring the Yes case than the No case in the local papers, so that may indicate what side the local publishers and the local public were on. 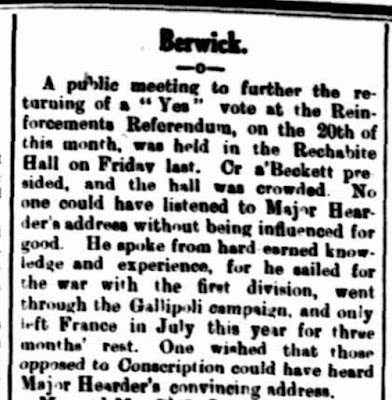 A pro conscription held at the Rechabite Hall at Berwick was well attended. 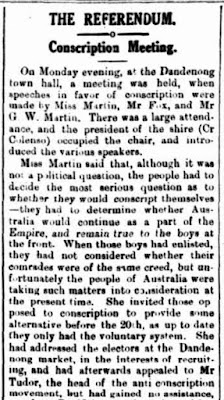 At this meeting at the Dandenong Town Hall, Miss  Martin made an impassioned speech in favour of the Yes vote. This is Miss Martin's speech in full from the article - which is a good summary of the Yes case and some of the issues raised during the debate -  nationalism, support for England and alluding to the sectarian nature of the debate where the Catholic Archbishop of Melbourne, Daniel Mannix, campaigned strongly against conscription. I presume Miss Martin was the daughter of G.W Martin, President of the Shire of Berwick who was also a guest speaker, this was George Wilson Martin of Beaconsfield Upper, it's a shame we don't know Miss Martin's first name.

On Monday evening, at the Dandenong Town Hall, a meeting was held, when speeches in favor of conscription were made by Miss Martin, Mr Fox, and Mr G. W. Martin. There was a large attendance, and the president of the Dandenong shire (Cr Colenso) occupied the chair, and introduced the various speakers.
Miss Martin said that, although it was not a political question, the people had to decide the most serious question as to whether they would conscript themselves - they had to determine whether Australia would continue as a part of the Empire, and remain true to the boys at the front. When those boys had enlisted, they had not considered whether their comrades were of the same creed, but unfortunately the people of Australia were taking such matters into consideration at the present time. She invited those opposed to conscription to provide some alternative before the 20th, as up to date they only had the voluntary system. She had addressed the electors at the Dandenong market, in the interests of recruiting, and had afterwards appealed to Mr Tudor, the head of the anti conscription movement, but had gained no assistance, nor from Dr Maloney, who informed her that the Official Labor Party did not favor sending men from Australia to fight. Such men, who were opposed to conscription, should have helped the volunteer movement, but had failed to do so. Married men had been forced to enlist because the single ones had failed to do so, and also had the audacity to remain behind and occupy the married men's positions. It was said that there were plenty of men in England, and therefore recruits were not required, but the figures which she would quote proved otherwise. It was cruel and wicked to ask women to vote on a question of this kind, but British women had proved themselves brave before, and would not flinch on this occasion, and would carry the proposition through on the 20th (applause) Men remained behind and allowed boys to fight for the country. Reinforcements were badly needed, for the Australian army was badly placed in comparison with the Allied armies, and therefore conscription was justified in order to gain assistance for the boys at the front. The alternative was to pull out of the war, which would be worse than Russia had done. If that happened,Australia would not be entitled to protection from the British army and navy, and would have to depend upon its own resources a protective policy and an undeveloped cadet system. The financial assistance, rendered Australia by Great Britain, should not be overlooked, re purchasing the products of the  Commonwealth, and she appealed to them not to be led by Mr Tudor, but to vote " Yes" on the 20th (applause).

This report shows that a Yes meeting at Lang Lang went off relatively well, however the Yes case was met by noisy resistance at Koo Wee Rup and egg throwing! 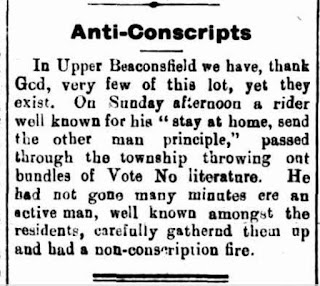 Clearly the Upper Beaconsfield correspondent for the Dandenong Journal was a Yes voter, going from this snippet.

Iona residents were  of the No persuasion. You can read about Frank Brennan here - he was a Catholic, a Labour Party politician, a Pacifist and an interesting and complex man.

*Information from the National Archives of Australia http://www.naa.gov.au/collection/fact-sheets/fs161.aspx