During the Great War many groups raised funds for the war effort, including the Australian Women's National League (AWNL). There is a description on the Australian Women's Register of the group (you can read the full article here)  - The Australian Women's National League (AWNL) was a conservative women's organisation established in 1904 to support the monarchy and empire, to combat socialism, educate women in politics and safeguard the interests of the home, women and children. It aimed to garner the votes of newly enfranchised women for non-Labor political groups espousing free trade and anti-socialist sentiments, with considerable organisational success. At its peak, it was the largest and arguably the most influential women's organisation in the country. By 1914 the AWNL claimed 52,000 members in three states. Closely associated with the United Australia Party, the financial and organisational support of the League was a key factor in the foundation of the Australian Liberal Party in 1944. At this point, the majority of members reconstituted themselves as the Women's Section of the Liberal Party. The League continued in a much reduced state.

During the War local branches operated at Berwick, Cranbourne, Pakenham Upper, Officer and Nar Nar Goon - they may well  have operated in other towns however I couldn't  find  any mention of this in local newspapers.

This is a report of the 1917 Annual General Meeting of the Nar Nar Goon branch of the Australian Women's National League. Mrs E.A Latta is Mrs Edgar Atherton Latta, born Leila Startup.  John Startup had  taken up the Mount Ararat Station at Nar Nar Goon in 1854 which had at one time the 'largest fenced grazing paddock' in Victoria - his land went from near Pakenham to Drouin. John later acquired property (336 acres)  on the corner of Bald Hill Road and Mt Ararat Road, the property was known as Oaklands and was where Leila was living at the time of her marriage. The Lattas were also early settlers in the area and the family is the source of the name Latta Road in Nar Nar Goon. Phillip and Michael Mulcare were also early landowners and the first subdivision of the Nar Nar Goon township on the south side of the railway was of Michael Mulcare's land. This is the source of the name Mulcare Road.  There is a James Mulcare and a James Raleigh Mulcare in the Electoral at Nar Nar Goon at this time, so one of them is the husband of Mrs J. Mulcare but not sure which or what her own name is.  Miss Jean Grey is possibly connected to the Grey family listed in the book From Bullock Tracks to Bitumen as an early Nar Nar Goon family. 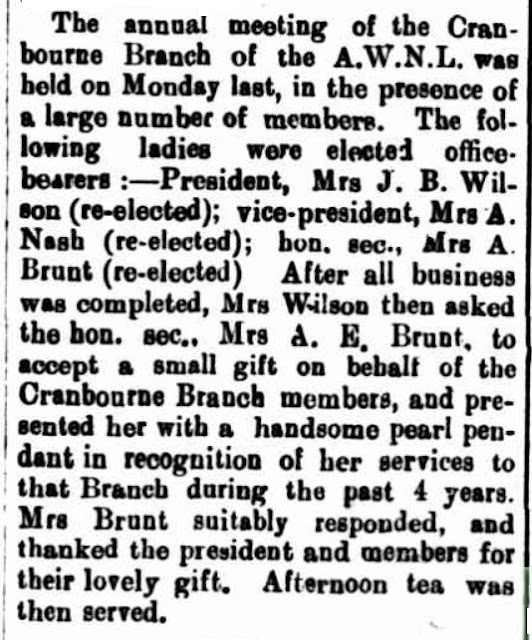 Not surprising that, as the AWNL  is described as a conservative women's group, local members tended to be from the 'well off' strata of society.  Mrs A. Nash, mentioned above in the Cranbourne group was Mrs Albert Nash or Mary Maud Nash to give her her own name. Mrs Nash was convenor of the Cranbourne Red Cross branch and was well connected to the Grices and the Ryans - you can read about the Cranbourne Red Cross and Mrs Nash's illustrious family here. Mrs A.E Brunt was Ellen Brunt, nee Carter, the wife of Andrew Edgar Brunt. Andrew was a son of Ralph Brunt, who had one thousand acres on the Cardinia Creek. He is the source of the name Brunt Road in Officer.  Ralph's cousin, William, had the Spring Villa property at Cranbourne (where the Settlement Hotel is now located) and is the source of the name Brunt Street in Cranbourne. Mrs J. B Wilson was the wife of James Brisbane Wilson, of Lyndhurst, the son of William and Euphemia (nee Brisbane) Wilson - Berwick pioneers. Mrs Wilson was born Margaret Ballanytne.

As with the Cranbourne branch of the AWNL the Berwick branch was also made up of women involved with the Red Cross - Mrs Scott Sharp, Mrs Pearson, Mrs Beaumont and Mrs Wilson. You can read about these women here. The other women listed are  Mercy Jane Davy  (nee Jacka) of Kippenross (later called Brentwood) in Berwick, you can read about the Davy family here.  Mercy's husband Humphrey had died in 1913. Mrs Jarrett was Eleanor Jarrett (nee Speeding), wife of William Henry Jarrett of Harkaway - their occupations in the 1915 Electoral Roll are listed as 'independent means.' Ogilvy - Mesdame Ogilvy would be a connection to Mr James Ogilvy, described in the Early Days of Berwick, as 'the son of Melbourne's earliest solicitors, who was enrolled  as one of the first pupils when Scotch College opened'. He lived on Buchanan's Road. Mesdame Sturtevant would be Margaret Sturtevant, the wife of Buxton Sturtevant listed in the Electoral Roll as an Electoplater.  The Early Days of Berwick also gives us some information on the Mesdame Tetley - she would be a connection to William Tetley, described as 'an old Harrovian, who lived at the eastern end on Buchanans Road'

What did the AWNL do?  Mrs Watson Robertson of the Central Branch addressed the Berwick Branch in May 1916 and this is some of what she said - Since the outbreak of war politics had been set aside and members had devoted their energies to patriotic work. Their motto was 'For God and Country'  and they were giving their support to many patriotic movements.  They had given four motor ambulances, and two were in Egypt and two in England.  After buying the ambulances there was a surplus, and this formed the nucleus of what is now the League's War Fund.  On a special gift day arranged last year over seven tons weight of goods were received. All the branches were contributing to the war fund, and the Central committee had from this been able to make the following donations : Belgian Relief Fund, £100; Red Cross (France), £20; towards a motor ambulance for Broadmeadows, £50  Lady Stanley's Recreation Hall, Broadmeadows, £10; Servian [i.e. Serbian] Fund; £10 10s; milk for Belgian babies, £10; Bed at Base Hospital, £25; and to the Lady Mayoress' League, £87 18s. For the Nurses they had sent one gross of Atkinson's Eau de Cologne and 15 dozen tins of Cadbury's chocolate. The sum of £250 had been given to the Y.M.C.A., £10 to. the Y.M.C A. Tent. £10 to the French Babies' Fund, £25 for French Motor Ambulance, and £25 to the Lady Mayoress' Patriotic Fund.  The sum of £2,336 had been collected to provide milk for the soldiers in the trenches, and 100 cases of 40 tins each were sent by every transport that could take them. Many gifts were sent to the soldiers at Xmas.