The Battle of Pozieres

The Koo-Wee-Rup Swamp Historical Society had Mr Barry Gracey of the  Pozieres Remembrance Association as their guest speaker at their recent luncheon. Barry was a very passionate speaker and is devoting his life to gaining recognition for our Pozieres soldiers.  The Pozieres Battle took place between July 23 and August 7 in 1916 at the village of Pozieres in France. 6,848 men were killed and 16,000 wounded. Of the men killed over 4,000 were never found and still lie in the fields around Pozieres. Twelve percent of all Australian soldiers that were killed during the Great War died at Pozieres, and many of these men had survived the Gallipoli Campaign.

The Pozieres Remembrance Association believes these men are not adequately recognised and they have purchased some land that was central to the battle in Pozieres for a memorial garden and to help protect the resting place of the soldiers. To this end they are selling 7,000 bricks at $50.00 each to help raise money for the memorial.  If you are interested in supporting this cause then you can donate via their website http://www.pozieresremembered.com.au/

Some of our local men who were killed at Pozieres are John Leslie Christie, the son of William and Ada Christie of Beaconsfield (Service Number 3054).   John was Killed in Action on July 19 1917 and had no known grave. John has a tree in the Beaconsfield Avenue of Honour and is listed on the Beaconsfield War Memorial. Edward Francis Doherty (known as Frank, Service Number 1218)  was the son of John Doherty of Tynong.  Frank was Killed in Action on  August 4, 1916 and has no known grave. Frank is listed on the Cora Lynn War Memorial and the Bunyip War Memorial.

Pozieres - before and after the battle 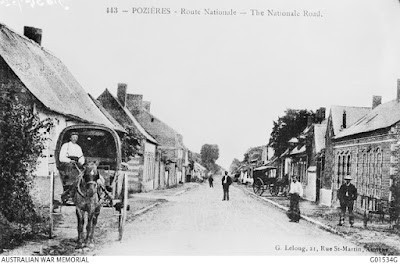 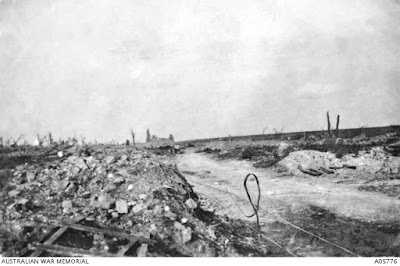 Pozieres, France 1916. The main street of the town, now a mass of rubble,  destroyed during battle.
Australian War Memorial image A057736
Posted by Heather at 11:45 PM

Email ThisBlogThis!Share to TwitterShare to FacebookShare to Pinterest
Labels: Battle of Pozieres, Pozieres