Clematis is a small town near Emerald. The town is on the Puffing Billy Railway line and the railway station was originally called Paradise Valley when it opened in 1902, the name was shortened to Paradise in 1908. According to Helen Coulson in the Story of the Dandenongs the area was known as Paradise until 1921 when a public meeting voted to change the name to Clematis, after the wild clematis creeper that grew prolifically in the area. An early settler, Michael O’Connor, named his farm Paradise  and his house Eden House, which became the Paradise Hotel  c.1926.   Having said all this, the area was clearly known as Clematis before 1921 as there are the five soldiers listed below, who all had that address on their enlistment papers, so I am unsure how that fits in with the other information on the Clematis name.

Here is a list of any soldiers I could find with a Clematis connection. There may be more, but as Clematis only had  a population of  94* in 1933 (the earliest population figure I can find) then it wasn't  a very large town. I have listed the Service Numbers (SN) so you can read their full service record on the National Archives of Australia website.

Boase, John (SN 6282)  John was 21 when he enlisted on October 24, 1916. He was a printer, even though another page of his military records has his occupation listed as poultry farmer, which more likely explains his Clematis address.  His next of kin was his father, also called John, of North Fitzroy.  John's address was Clematis Post Office, Paradise. John Returned to Australia on July 21, 1917 and was discharged on medical grounds on January 24, 1918, due to pulmonary tuberculosis.

Hanlon, James Joseph (SN 4911) James enlisted at the age of 42 on February 18, 1916, and was discharged as he was Absent Without Leave. He then re-enlisted on April 2, 1917 at the age of 43. His occupation was a groom and his address on the second enlistment was Clematis Post Office. James served in France and then Returned to Australia November 8, 1918 and was discharged on medical grounds suffering from premature senility and rheumatism.

Holliday, Francis Bewley (SN 4732) Francis was a 34 year old labourer when he enlisted on February 17, 1916. His next of kin was his wife, Ethel, and their address was listed as Post Office, Clematis, Paradise.  Francis was Killed in Action in Belgium on April 6, 1918. Ethel was still living in Clematis in 1923, when she wrote a letter to the Army requesting Francis' medals (see below) 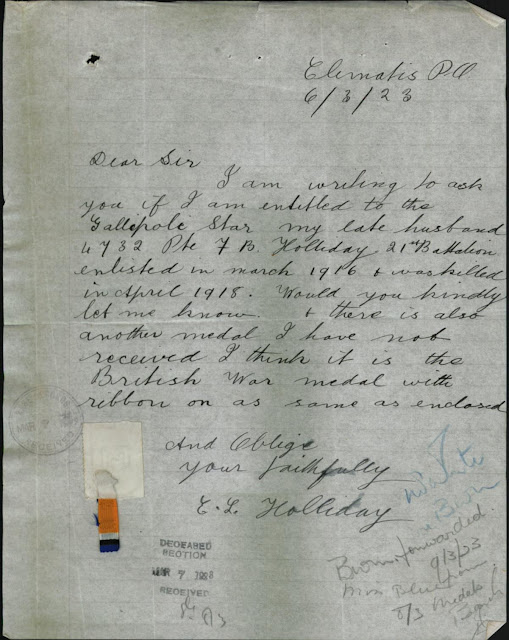 Wendlandt,  Franz (SN 3524 and 21275) Franz enlisted as a 19 year old on July 12, 1915. He suffered from appendicitis and had to come back to Australia where he was discharged on August 5, 1916. Franz re-enlisted on June 24, 1918  at the age of 22 and his occupation was Orchardist.  Franz Returned to Australia on January 6, 1919. Franz's next of kin was his mother, Helen, Clematis Post Office, Paradise. On his first enlistment paper it said that his his mother was a naturalized British subject and his 'Father German left Country' On the second enlistment paper it said 'Fathers whereabouts unknown'

This is what I know about the family - according to the Victorian Births, Deaths and Marriages Index Helen Janet Doswell married August Heinrich Wendlandt in 1886. In the 1912 Electoral Rolls there is an August Heinrich Bernard Wendlandt, Professor of Music, address Clematis; a Bernhardt Wendlandt, occupation Musician, address Menzies Creek and a Helen Janet Wendlandt, occupation home duties, address Menzies Creek. There is  a Naturalization paper for Helen at the National Archives - she was born in Sussex in England in 1861 and arrived in Australia April 5, 1886 and her Naturalization was confirmed on October 19, 1914. I don't know why she had to be naturalized as she was already a British subject, but her papers have the notation 'married to a German' so perhaps with the start of the War she wanted to make sure of  her citcizenship. Helen's occupation was listed as 'Proprietress of Convalescent Home' and the address was Paradise Valley.

As for her husband, a clue to his whereabouts can be found in a report in the Kyneton Guardian of April 11, 1914. There was a report on the Kyneton Musical and Elocutionary Competitions and it said that Herr Wendlandt was unexpectedly detained in Germany, whither during last year, he went on a short holiday.  I wonder what happened to him and whether he  survived the War? 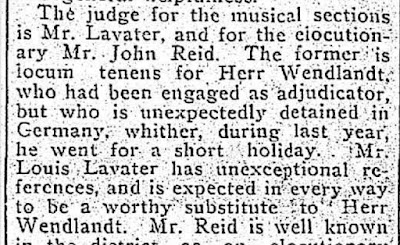 Adding to the mysteries surrounding this family is this one. There is a letter (see below) in Franz's file from Helen, dated July 12, 1915 giving permission for Franz to enlist. In the letter she calls him her 'adopted son'  and  it's hard to interpret her writing but it looks like his 'own name' or it may be 'born name' was Sydney McIntyre. It would be interesting to know the story behind this adoption. 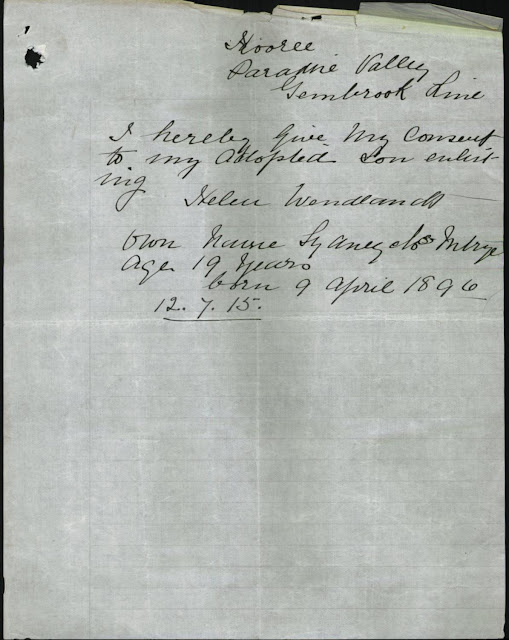 Email ThisBlogThis!Share to TwitterShare to FacebookShare to Pinterest
Labels: Clematis