Celebrating the Armistice in the Cranbourne Shire in 1918

There was a full report in the South Bourke and Mornington Journal of December 5, 1918 on the 'great day for juveniles' held to celebrate the signing of the Armistice.   The article is from Trove and you can read the full article here, but I have transcribed it below. It must have been an amazing experience for the children, many of whom would hardly have remembered  the time before Australia was at War and most of whom would have had  a soldier in their extended family. 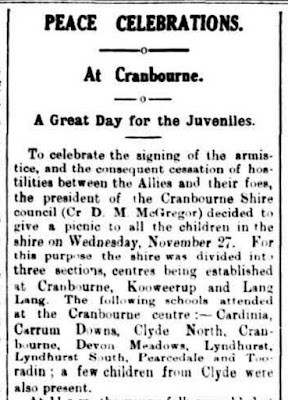 PEACE CELEBRATIONS.
At Cranbourne
A Great Day for the Juveniles.

To celebrate the signing of the armistice,and the consequent cessation of hostilities between the Allies and their foes, the President of the Cranbourne Shire Council (Cr D. M. McGregor) decided to give a picnic to all the children in the shire on Wednesday, November 27. For this purpose the Shire was divided into three sections, centres being established at Cranbourne, Kooweerup and Lang Lang. The following schools attended at the Cranbourne centre :- Cardinia, Currum Downs, Clyde North, Cranbourne, Devon Meadows, Lyndhurst, Lyndhurst South, Pearcedale and Tooradin; a few children from Clyde were also present.

At 11 a.m. the young folk assembled at the Shire hall, and were lined up in fours to take part in the procession, which was headed by the Langwarrian Military band. The march was down Sladen street, along Codrington and Childers streets and up High street back to the Shire hall. This was well carried out, and the teachers were complimented on the fine display made.

On returning to the Shire hall the children formed three sides of a hollow square round the Union Jack, which was flying from the recently erected flag-pole. The flag was saluted, the declaration made, and cheers given for our King, our Empire, our Commonwealth, and our own soldier boys. All present solemnly bowed their heads in silent remembrance of the lads who can never come back to us - our honored dead.

The Shire President then gave a short address, briefly stating the reasons for the rejoicings. He then introduced Chaplain Captain Gates, who gave a very interesting address on many phases of the war. The National Anthem and ‘Our Splendid Men’ were sung by the whole assemblage, the band leading the singing.

The children were then marched to the picnic-ground, where they were arranged in rows of fifties. A handsome medallion, bearing the inscription, ‘Shire of Cranbourne. Signing of Armistice, Nov. 11, 1918’ was handed to each child.

Dinner was served, the good things provided were of first-class quality, and the local caterers, Messrs J. Taylor and J.Thorpe, were complimented, on all sides for the excellent viands supplied.

After dinner, games and sports were indulged in during the afternoon. Races of all kinds for boys and girls were spiritedly contested and the judges, Messrs Callanan and McKenzie, had their work cut out to separate the winners from the rest. The sports were managed by representatives of the various school committees and teachers, with Mr J. H. White as starter. It was unanimously agreed that the kiddies had had a great afternoon.

Shortly after 4 o'clock all again wended their way to the picnic ground, where tea was  heartily partaken of. After enjoying a splendid meal each child was presented with a bag of sweets. Before dispersing ringing cheers were given for President McGregor for his kindly thoughtfulness in giving the children such an enjoyable time.  The President, in a few words, gracefully acknowledged the compliment.

The merry-go-round was a great source of pleasure, not only to the juveniles, but also to ‘the children of a larger growth’, many elderly folk seeming to enjoy a ride as much as the little ones.

The Langwarrin Military band played some very fine selections during the day, and added greatly to the enjoyment of the gathering.

The picnic was a great success in every way. All the arrangements for the festivities were made by the local committee, of which Mr J. H. White was chairman and Mr D. A. Schulze, hon. secretary. The organization for the day was highly praised. All the details had been carefully planned beforehand, consequently everything worked with the most smoothness. The ladies of the town and district again proved themselves to be willing and efficient workers.

President McGregor was delighted with the success of the day's rejoicing, and no doubt feels exceedingly grateful to all, who in any way, helped to make the event what it truly was - a red letter day in the history of Cranbourne.