The following article appeared in the Pakenham Gazette of April 26 1918 about the recent unveiling of the Honour Board at St Patrick's Catholic School in Pakenham.  The Board is described as a very handsome one, the panel being of blackwood, with a massive  frame of Queensland figured oak. I don't know if it is still there. You can read the full article from the Pakenham Gazette here and another report about the unveiling of the Honour Roll in The Advocate of May 4, 1918 here.

Rhoden, Norah Sister. Sister Rhoden is listed as Norah in the report but her first name was spelt as Nora  on her enlistment papers. Nora enlisted in Ismaila in Egypt on March 15, 1916. She was 35 years old and served in France and England and Returned to Australia February 2, 1919. Nora was the daughter of John and Kate Rhoden, who were obviously at Pakenham during Nora's school years. Nora died on July 22, 1952 and her obituary appeared on page 2 of The Age of July 24, 1952.


Bourke, James Harrison  (SN  2781)    James enlisted on  November 11, 1914 - he was  28 years old and an Auctioneer.   He  Returned to Australia August 17, 1916 and was discharged on medical grounds on October 9, 1916 due to a 'recurrent high inguinal hernia'
Bourke, Robert Ievers (SN 1885)  Robert enlisted on June 16 1915 aged 28. He was also an Auctioneer. Robert was wounded in action in August 1916, gun shot wound to back and chest, which he recovered from and he returned to fight again and gained a promotion to Lieutenant.  Robert was wounded again in May 1918 - a gun shot wound to the left leg where his tibia and fibula was fractured and was sent back to Australia in November 1918.
Robert and James were the sons of Daniel Bourke and Frances Ievers, who were living in Stratford when their sons enlisted. Daniel had previously owned 400 acres in Pakenham, Mt Bourke, which was part of Thomas Henty's Pakenham Park. Daniel's parents were Michael and Kitty Bourke who took up the 12,800 acre Mintons Run property in 1843 and in 1849 built the La Trobe Inn (also known as Bourke's Hotel for obvious reasons) on Toomuc Creek.

Dwyer, Thomas Kelly (SN 7243) Thomas enlisted on November 20, 1916 in Blackboy Hill in Western Australia. He was a 26 year old Hospital Attendant. Thomas was Killed in Action in Belgium on March 12, 1918.
Dwyer, William Joseph (SN 7233) William enlisted in Sydney, on January 25, 1917. He was a 25 year old Coal Lumper. He was Wounded in Action in France in May 1918 (Gun shot wound to left buttock) but recovered and rejoined his Battallion and Returned to Australia July 23 1919.
Thomas and William were both born in Pakenham. Thomas' next of kin was his father, John Kennedy Dwyer, of Claremont in Western Australia and William's next of kin was his mother, Mary Dwyer, also of Claremont.

Fahey, Edward Joseph (SN 1671A) Edward was 21 when he enlisted on May 4, 1915. He was born in Pakenham and was a grocer. He Returned to Australia March 28, 1919.
Fahey, James  (SN 1695) James enlisted at the age of 31 on August 10 1915. He Returned to Australia December 18, 1918. He was born in Carlton according to  his enlistment paper, but the Victorian Births, Deaths and Marriage Index have him listed as being born in Pakenham.  His occupation was labourer. James died in 1954 aged 65.
Fahey, Patrick (SN 2316) Patrick enlisted at the age of 24 on November 16, 1915. His occupation was a wheeler and he was born in Pakenham. Patrick Died of Wounds received in Action in Belgium on October 16, 1917.
Fahey, Thomas   (SN 3289B) Thomas was born in Pakenham and enlisted, at the age of 25,  on July 21, 1915 in Liverpool in New South Wales. He was Killed in Action in France on November 18, 1916.
Fahey, William Alexander  (SN 377)  William enlisted on January 22, 1915, he was a 26 year old labourer. He was born at Pakenham. William was awarded the Military Medal - For most conspicuous gallantry in action at Mouquet Farm on 26th August, 1916, in continuing to fire on the enemy after he had been wounded in both arms.  William Returned to Australia on March 13, 1918 and was discharged ion medical grounds in July - he had Tachycardia - an abnormally rapid heart beat. William died in 1956 aged 65.
The Fahey brothers all had their mother Margaret  of Carlton as their next of kin. She was listed variously as  Margaret Christopherson, Margaret C Fahey or Margaret Christopherson Fahey. I think we can assume that their father John Fahey was deceased (I believe he died in  1895 aged 45 and is  buried at the Pakenham Cemetery)   but I cannot find a marriage of Margaret to Mr Christopherson, although I did find her death in 1927 at the age of 64 where she was listed as Margaret Christopherson.  John and Margaret (nee Kelly) Fahey had six boys - there was also a John, born in 1886, so he was the second eldest. I don't have any information about him.
So far, the Fahey Brothers are the only set of five brothers that I have come across from our local area who enlisted, but I have written about other sets of three or more brothers who enlisted in various other posts.

Halloran, Timothy  (SN 3134) Tim was the son of John and Joanna Halloran of Pakenham and they were both listed as his next of kin when he enlisted on July 19, 1915 at the age of 33.  Ironically, he was Killed in Action in France, exactly one year later on July 19, 1916.

Hayes, John Edward (SN 2451) John enlisted on May 10 1916 and said he was 18, born in Pakenham and an orphan - he also said his name was Robert Campbell Pattison. In reality, as he said in his Statuary Declaration of October 29, 1917, he was actually John Hayes and had been born June 24, 1899, which would have only made him 16 when he enlisted.  John was the son of Jeremiah Joseph and Ellen Mary Hayes of Pakenham.  John Returned to Australia on October 8, 1919.

Hogan, Albert William (SN 14434) Albert enlisted on September 23, 1916 at the age of 22. He was a motor driver. He was born in Pakenham but living in Hawthorn when he enlisted, as was his father Charles, his next of kin. Albert Returned to Australia July 5, 1919.

Kelly, John  Patrick (SN 5388)  John was born at Nar Nar Goon and enlisted on March 10 1916 at the age of 36. His next of kin was his wife, Mary Kelly, of Carlton and he was a  rubber worker. He died of disease in England on October 26, 1918. I couldn't identify this John Kelly until I  found an entry for him in the Narre Warren & District Family History Group's book Sacrifice and Patriotism: a World War One walk in Pakenham Cemetery. John was a cousin to  the Fahey Brothers.

Keogh, Eustace Graham (SN 14516) Eustace was an 18 year old student when he enlisted on May 18, 1916. Eustace Returned to Australia on March 22, 1919.  His next of kin was his father, Dr Arthur George Keogh, who was listed in the Electoral Rolls at Pakenham in 1908 and 1909 and then at 14 Droop Street in Footscray, the same address as Eustace. We can't actually access his records on the Australian National Archives website as they have been 'amalgamated with this person's later service documents'

Keogh, F.A  Not sure who this is - is he a brother of Eustace, above? Eustace did have  a brother who enlisted, Basil Hewlett Keogh (SN 14353) but I don't see how B.H Keogh could be listed as F.A Keogh. I can't see any F.A Keoghs in any list. Apart form Dr Keogh at Pakenham, in 1909 there was also a  Constable Patrick Keogh in the Electoral Roll at Pakenham the same year, is this person connected to him?  I don't know. 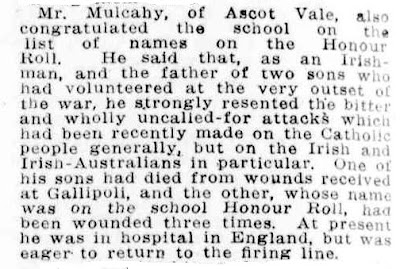 Mulcahy, Richard Lindley (SN 5129)   Listed as L. Mulcahy on the Honour Board. Richard enlisted at the age of 22 on January 18, 1915 - he has various enlistment papers - one of the others say he enlisted on July 14 1915;  his mother Bridget was his next of kin on one and his father John on another - but they did have the same address 133 Charles Street, Ascot Vale. His occupation was a joiner and he was  born in Nagambie, but presumably spent some time at St Patrick's School as a child. Richard Returned to Australia January 31, 1919. As you can see from this excerpt (above) from the article   in The Advocate about the unveiling of the Honour Roll, Mr Mulcahy of Ascot Vale had a son listed on the roll and another son who died of wounds received at Gallipoli. The son that died was Thomas Edward Mulcahy (SN 773) who passed away on August 14, 1915 at the age of 30 at the Alexandria 19th General Hospital - he had fractured ribs and gun shot wounds to the back and shoulder.

Maher, Thomas Francis (SN 50190) Thomas was 18 when he enlisted on October 22, 1917. His occupation was student and he was the son of Stephen and Bridget (nee Ryan) Maher of Pakenham. He Returned to Australia July 23, 1919. Thomas was granted  a Soldier Settler Farm (80 acres in the Parish of Nar Nar Goon). You can read his full Soldier Settlement Record on the Battle to Farm website, here.


Ward, Arthur  (SN 20154)  Arthur Ward was two months off the age of 42 when he enlisted at Blackboy Hill in Western Australia, on November 19, 1915. He was born at Ballarat and his occupation was a miner and his next of kin was his sister in law, Ellen Hawes of Cowwarr. As the article in the Pakenham Gazette, above, states he died of wounds on April 17, 1918. He had received a gun shot wound the previous day in the shoulder that penetrated the spine, fighting in France. I wonder how long he had been away from Pakenham. Arthur's mother, Eliza Fraser and her second husband, operated a hotel in Pakenham from 1881 to 1890, you can read about Eliza, the Hotel and the rest of the family, here. 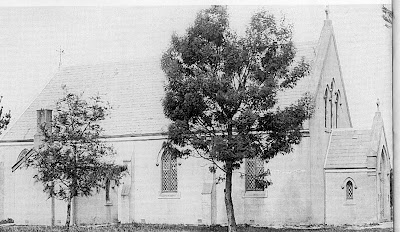 This is St Patrick's Catholic Church at Pakenham, built in 1872. It would have been a familiar sight to all the men listed on this Honour Roll. The School opened in 1888.
Photo from North of the Line: a pictorial record, published by the Berwick Pakenham Historical Society.