The Cranbourne Avenue of Honour was officially opened on August 9, 1919. The Avenue represented 59 men and two women, Sister Norah Lehman and Sister Aileen Lehman. Norah and Aileen  both enlisted on July 17, 1915 into the Australian Army Nursing Service. They were the daughters of George John Lehman and Kate Mary O'Connell who married in Adelaide in 1877. George and Kate had five children in Burra (South Australia) - Stanley Hocking (born) 1878, George Reginald 1879, Norah Blanche, 1882, Ethel, 1884 and Aileen 1886. The next daughter  Cathleen Kate was born in 1888 in Queensland, then daughter Ada was born in  1892 in Dandenong and their last child, Sidney James was born in 1893 in Adelaide.

George Lehman took over the licence of the  Bridge Hotel in Dandenong in February 1889. There was an article in the South Bourke and Mornington Journal of May 10, 1893 saying that the Lehmans had resigned their interest in the licence of the Bridge Hotel. Mrs. Lehman's name was synonymous with attention, civility and good liquor- It is not improbable that they may return to Dandenong. This was prophetic as the same paper reported on July 1, 1896 that the Lehmans had returned to the Bridge Hotel which had been thoroughly renovated.  I presume, as their last child. Sidney, had been born in Adelaide that they had returned to South Australia in the intervening three years. In December 1897 the licence of the Hotel was granted to Kate Lehman (not sure how she had the time to run a hotel as she had eight children ranging in age from nineteen to four!) They operated the Hotel until the end of 1901.

The family was later living in Malvern East where John  was a 'stock dealer' and they were in East Caulfield when Norah and Aileen enlisted in July 1915. In the  1917 Electoral Rolls  George and Kate were at 'Springmeadows' Cranbourne and his occupation was grazier. At some stage they went back to Malvern East and that's where George died on July 27, 1932 at the age of 77. Catherine died on January 1, 1941 at her son's house in Moonee Ponds. It was her youngest son's house, Sid, who was a Doctor.

So back to Norah and Aileen. Aileen was 27 years old when she enlisted, in Egypt. She had trained and worked at the Melbourne General Hospital and also worked at the Albury Hospital.  Aileen served in France and then had a few bouts of pleurisy. Aileen was sent back to Australia on medical grounds, as 'exposure to cold' made her condition worse and she Returned to Australia on July 17, 1917.  On November 17 of the same year she married Cecil Paul Best at Kew. I believe it was a short lived marriage as by 1919 (according to the Electoral Rolls) Aileen (but not Paul)  is listed with her address as care of her parents in Cranbourne and from 1924 she is living at various addresses in Malvern East with her sister, Norah and sometimes other family members. Aileen died in December 12, 1953 aged 68. The death notice in The Argus listed her as 'late first A.I.F' and the mother of Dr Jim Best and the grandmother of three and no mention of the husband. 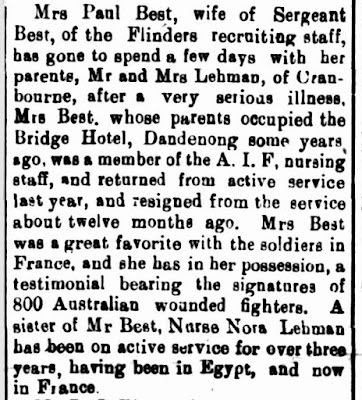 Norah had also trained at the Melbourne General Hospital and had been Matron at Albury Hospital before she enlisted in Egypt with her sister. She served in France and was Mentioned in Despatches for distinguished and gallant service and devotion to duty, this was promulgated on June 29 1917. Norah Returned to Australia  on April 19, 1919.  On her return to Melbourne Norah, as I said before, was living in the Malvern East area and hre occupation from 1924 was listed as 'Inspectress'  - she was a Health Inspector. I have found references to her working at the City of St Kilda around 1930 (see below) 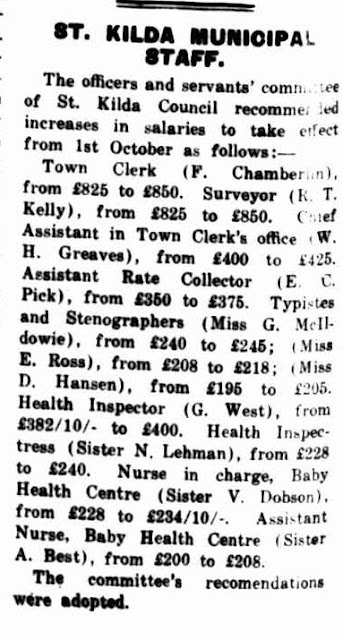 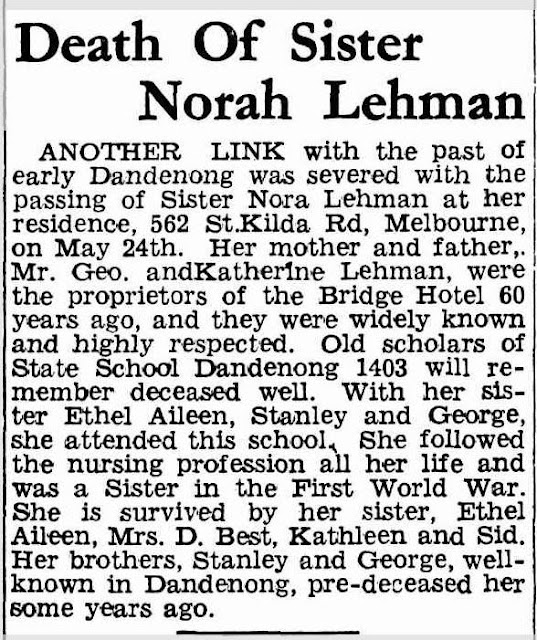