This post looks at  three sons of Stephen and Bridget  (nee Ryan) Maher of Pakenham. Stephen was a member of the Police Force and he was stationed at Pakenham for a number of years from around 1912 until he retired in 1920, after 33 years of service.Stephen and Catherine had ten children, Rosaline (born 1886), Cathleen (1888), Florence Mary (1890), Olive Veronica (1893), Stephen Raymond (1894), John Thomas (1896), Thomas Francis (1899), Daniel Michael (1901) and Leonard Joseph (1903) Mary Monica (1905). According to a report in the South Bourke and Mornington Journal of June 17, 1920 after his retirement he planned to take up farming and grazing on a property he has acquired locally. Stephen died in April 1931 aged 70 and is buried at Pakenham and Bridget died in January 1939 aged 77 and is buried at Box Hill. You can read an obituary of Bridget in The Advocate here and her death notice from The Advocate is below. 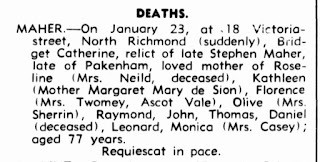 The three sons of Stephen and Bridget who served overseas were Raymond Stephen (called Roy on his enlistment papers), John Thomas  and Thomas Francis. Mrs Maher's obituary said that four sons enlisted in the Great War, three seeing active service so I presume that the fourth son must have been Daniel who was born 1901, but that would still have made him only 17 when the War ended, so not sure about that and Leonard would have been far too young.

Thomas Francis (SN 50190) was an 18 year old student when he enlisted on October 22, 1917.   Corporal Thomas Maher Returned to Australia on July 23, 1919. Thomas was granted an 80 acre Soldier Settlement farm on his return, you can read his full record here on the Battle to Farm website. 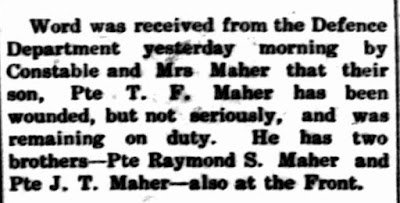 Roy sent a letter home to his parents in 1915, he makes it all sound rather pleasant as though he was on holiday and not just having survived Gallipoli,  but obviously was restricted in what he could write. It's  a lovely letter and interesting letter and I have transcribed it below. It was published in the Pakenham Gazette.

AT THE DARDANELLES..
Mrs Maher, wife of Constable Maher, Pakenham, has received the following letter from her son Ray, who is fighting the Turks and Germans at the Dardanelles.

I received your most welcome letter a little time ago. We are back again from the Dardanelles, as there is not space to get the horses off, and the mules can do better there, as the country is very hilly and rough. We have a nice camp out from Alexandria about nine miles, with a train running right through the camp, and the tram within 10 minutes walk. Best of all, the beach is only about a quarter of an hour's walk. We go down to swim the horses now and then, but go our selves every evening, It is where all the tourists come for their holidays, and there are a lot of English and French people there, so we have a good time with them.  I only wish I could speak French; I can only speak a little of it, also a little Egyptian just enough to be understood.

The people here seemed to think Australia .only a little island, but they were surprised to hear that it is bigger than Europe, and that most of the inhabitants are white, instead of black, as they thought. I am writing this in the horse lines, as I am on stable guard, taking the place of my mate, who wanted to go to the races. The sun is about 200 in the shade - that is what it feels, at any rate; and the flies would drive a fellow mad.

Most of our chaps are at the Dardanelles, but a lot of us had to come back with the horses. Many of our men who were wounded are going back in a day or two; they are getting well again.

I think Italy will make a difference when she comes into the war; she will make the war end sooner.

I must bring this letter to a close, with love to all at home from Ray.