I came across this article in the Dandenong Journal of May 21, 1941 about the neglected state of the Pakenham War Memorial. It's interesting that after the enthusiasm of having Memorials erected in the late 1910s and the 1920s that it didn't take all that long for the Memorials to be neglected. The Pakenham War Memorial was officially unveiled on January 15, 1921 by Brigadier General Brand. There is a report in Dandenong Journal of February 9, 1928, how the War Memorial is 'a disgrace' (you can read the article here http://nla.gov.au/nla.news-article200675138) The reason would have been, as Cr Bourke said in 1941 that 'that the trouble was that nobody was responsible for the care of the memorial' 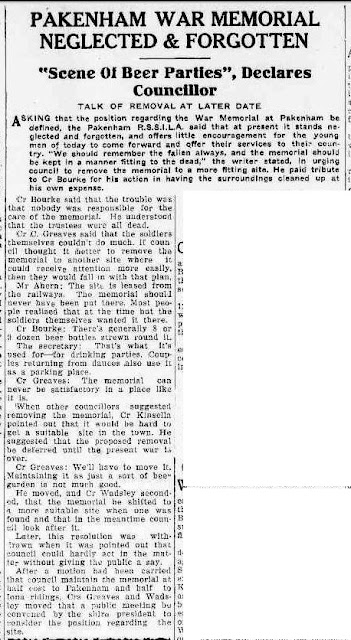 Here is the text from the article.

Asking that the position regarding the War Memorial at Pakenham be defined, the Pakenham R.S.S.I.L.A. said that at present it stands neglected and forgotten, and offers little encouragement for the young men of today to come forward and offer their services to their country. “We should remember the fallen always, and the memorial should be kept in a manner fitting to the dead,” the writer stated, in urging council to remove the memorial to a more fitting site. He paid tribute to Cr Bourke for his action in having the surroundings cleaned up at his own expense.

Cr Bourke said that the trouble was that nobody was responsible for the care of the memorial. He understood that the trustees were all dead. Cr C. Greaves said that the soldiers themselves couldn’t do much. If council thought it better to remove the memorial to another site where it could receive attention more easily,then they would fall in with that plan.

Mr Ahern; The site is leased from the railways. The memorial should never have been put there. Most people realised that at the time but the soldiers themselves wanted it there.

The Secretary: That’s what it’s used for - for drinking parties. Couples returning from dances .also use it as a parking place.

Cr Greaves: The memorial can never be satisfactory in a place like it is.

When other councillors suggested removing the memorial, Cr Kinsella pointed out that it would be hard to get a suitable site in the town. He suggested that the proposed removal be deferred until the, present war is over.

Cr Greaves: We’ll have to move it. Maintaining it as just a sort of beer garden is not much good.

He moved, and Cr Wadsley seconded, that the memorial be shifted to a more suitable site when one was found and that in the meantime council look after it.

Later, this resolution was withdrawn when it was pointed out that council could hardly act in the matter without giving the public a say.

After a motion had been carried that council maintain the memorial at half cost to Pakenham and half to lona ridings, Crs Greaves and Wadsley moved that a public meeting be convened by the shire president to consider the position regarding the site.

Where was the Memorial Park?  According to the Back to Pakenham: Souvenir Booklet of March 1951 the community first asked the Railway Department 'for the block of land to the Station Entrance' This was refused on the grounds that it might be needed for railway purposes, but the Department allowed a  portion about one chain wide, running from Station Street to Station Road. The stone was erected and the community raised money for a fence, a hedge and gates, garden seats and a machine gun enclosed in brickwork with a glass front. The booklet goes onto say that for  a number of years it was well cared for, but as time went on it was allowed to get into a state of untidiness - everybody's business being nobody's business.

The War Memorial is now outside the Hall and Library Complex in John Street.