I  received an email from Marilyn Williams who has kindly provided these photographs of the welcome home  for Tom Williams. Tom was born in 1897 and registered with the surname Bregazzi. His uncle,Tom Bregazzi, had  a farm in Cranbourne. The  photographs were taken in Duff Street Cranbourne, possibly at the farm.  There is a Bregazzi Reserve situated on the area where the farm was once located. It was divided into an estate in  late 1970s, after Tom Bregazzi died, aged  97.

Tom, whose Service Number was 657, enlisted on August 12 1915 at the age of 18. He was three years into an apprenticeship as a wood worker (cabinet maker). His next of kin was his mother, Mrs Madeline Deer, whose address was Cranbourne Post Office. His mother and step father, Henry Deer, signed the consent form. His employer, Mr Griffiths, also signed a form releasing Tom from his employ so he could serve in the 'Imperial Force'. Tom Returned to Australia July 22, 1919. 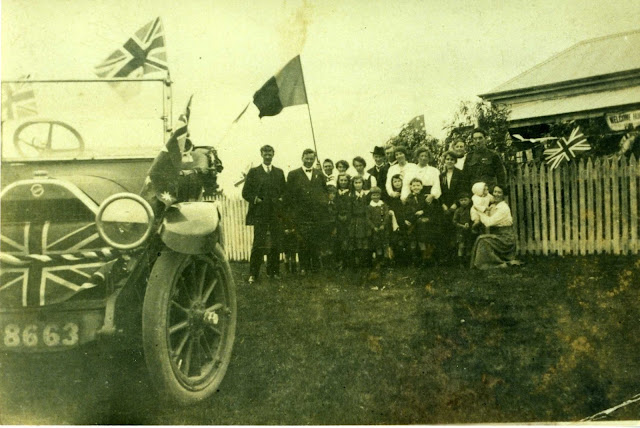 Tom Williams is standing to the right of the photograph

Some of the young ones standing are Tom & Florence Bregazzi's children :-Tom, Glad, Win, Ron...Keith and Chas yet to be born. 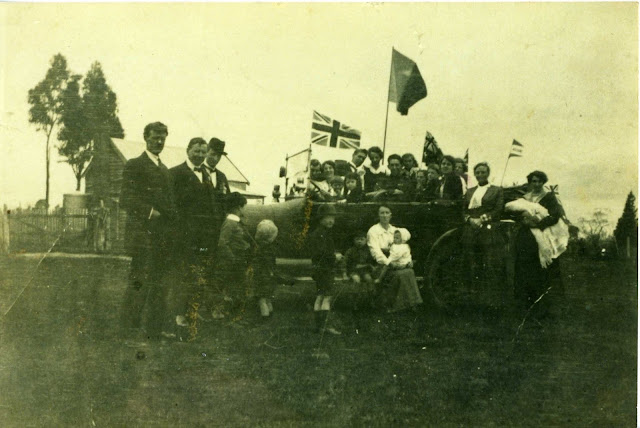 Tom is seated in the car, just above the lady sitting on the running board of the car.

Marilyn also tells us that  after the War, Tom Williams emigrated to New Zealand, and was the father of Yvette Williams who was the first Olympic Gold Medalist for New Zealand in 1952, when she won the long jump at the Helsinki Games. Yvette had won the gold medal in the same event at the 1950 Empire Games, held in Auckland.  She was named Otago's Sportswoman of the Century in 2000.

In addition, Tom Williams' son (and therefore Yvette's brother) Roy competed in many sports in New Zealand  and was a Commonwealth decathlon champion. In 2014 Roy wrote a book titled Sports Crazy, describing his career in Sport and later as a Sports Journalist. Included in the book, is a photo of Madeline Bregazzi, the mother of Tom Williams (therefore grandmother of Yvette & Roy) and sister to Tom Bregazzi.