The Beaconsfield War Memorial was officially opened on Saturday March, 13 1920 by General Brand. At the opening ceremony, the President of the Memorial Committee, Mr W. Nixon said that he was proud of the fact that 33 men had enlisted from there. All regretted that 9 of these had been called upon to make the Supreme Sacrifice. 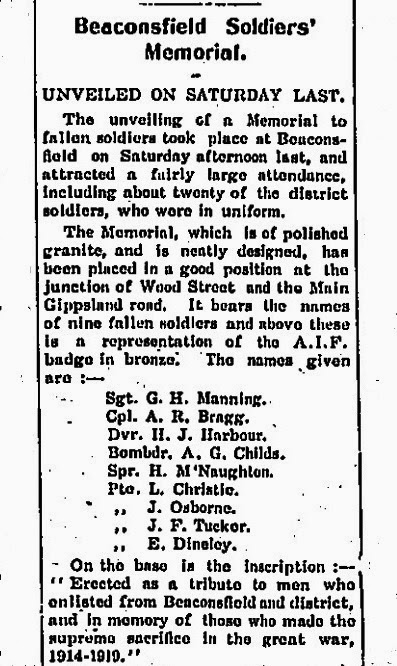 The Memorial only has the names of the nine men who did not return, and they are listed below with their Service Numbers (SN) so you can look up their full record on the National Archives of Australia website.

Bragg, Arthur Robert (SN 2564) Arthur was 39 when he enlisted on August 2, 1915. His next of kin was his wife, Emily, who owned the Central Hotel in Beaconsfield. He was reported missing in France on July 28, 1916 and  a later Court of Enquiry determined that he had been Killed in Action on July 19, 1914. We have come  across Arthur before in this blog as he was in a list of men who had played football for Berwick and who enlisted. You can read about these footballers and Arthur and a fairly salacious report about his divorce from Emily here

Childs, Albert George  (SN 2599)  Albert enlisted on July 7, 1915. He was born in England and was a 29 year old dairyman. His father was his next of kin, from Bridport in Dorset where Albert was born, His address on the Nominal Roll is Primrose Park, Beaconsfield, however he is listed as living at Nar Nar Goon in the 1914 Electoral Roll and so he is also honoured on the Nar Nar Goon Honour Roll which is at the Nar Nar Goon Public Hall.

Christie, John Leslie  (SN 3054) He was listed as L. Christie on the Memorial, so it seems like he was known as Leslie, so that's what we will call him.  Leslie was born in Lang Lang and was 25 years old when he enlisted on July 22, 1915. His next of kin was his father, William Christie of Beaconsfield.  Leslie was listed as missing and a Court of Enquiry determined that he was Killed in Action on July 19, 1916, in France.

Dineley, Edward Bernard (SN 1151)  Edward was born in Charters Towers and was a 22 year old engineer when he enlisted on March 22, 1916. His next of kin was his mother, Mary Dineley, who had the Cardinia Park Hotel at Beaconsfield.  Edward was Wounded in Action in Belgium and he died from these wounds on September 22, 1917. 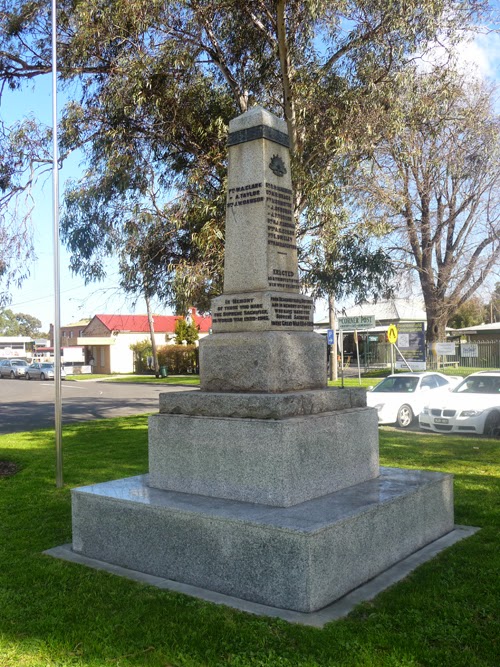 Manning, George William Harold (SN 219)  George enlisted on August 17, 1914. He was 20 year old salesman. His next of kin was his father, J.G Manning of Beaconsfield. I presume this is John Goodyear Manning, who is listed in the 1914 Electoral roll at Beaconsfield.  George died of wounds, which were received whilst fighting at Gallopoli,  on August 8, 1915.

Osborne, James Patrick (SN 2733)  James was born in Walhalla and enlisted on August 2, 1915 aged 36. His next of kin was his mother, Bridget Osborne, of 'Lower Beaconsfield', I assume some people still called the town around the Railway Station that to distinguish it from Upper Beaconsfield. James was Killed in Action in France on August 19, 1916.

Tucker, John Frederick  (SN 2795)  John was an orphan and he enlisted at the age of 22 on August 2, 1915. his next of kin was listed as his employee, Mr A. W Shorthouse of Upper Beaconsfield. There is an Arthur William Shorthouse in the  Electoral Rolls, so I believe this is him.  John was Killed in Action in Belgium on September 3, 1916. There is a letter on his service file at the National Archives, from Mr Shorthouse, requesting John's medals. Mr Shorthouse said that John had no blood relations and had lived and worked with him for eight years, prior to which he was an Orphanage boy. The AIF would not give him the medals as the Deceased Soldiers' Estate Act had  a prescribed list of whom the medals were to go to (they had to go to a blood relation) and suggested that Mr Shorthouse get a Statutory Declaration setting out his claim. This was in March 1921 and the file does not tell us whether Mr Shorthouse was successful.