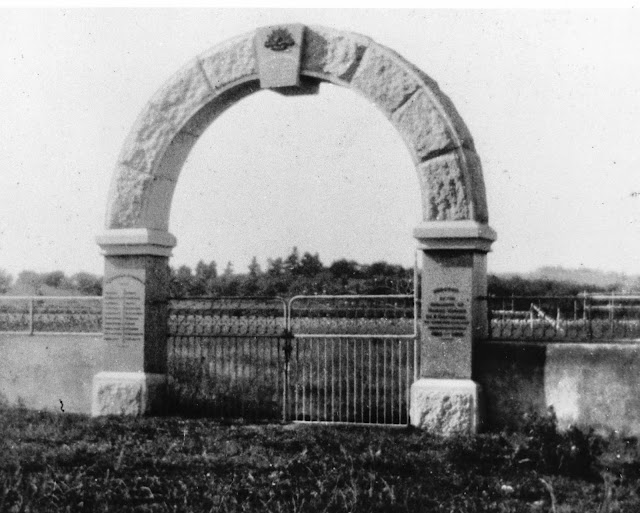 According to Discovering ANZACs and the Australian ANZACs in the Great War  websites there were 44 men who were either born or enlisted in Narre Warren or Narre Warren North. There are 29 soldiers listed on the War Memorial and of these 29 only 14 are amongst the 44 listed on Discovering ANZACs and  Australian ANZACs in the Great War sites.  Once again, it would be interesting to know how the local community selected the men who would be honoured on War Memorial.

I have done some research on the men listed on the War Memorial. It took a while to identify some of the men and there are still a few I still haven't been able to identify. If you know any information about these soldiers, then I would love to hear from you. It's interesting to note that seven of the men had a Narre Warren connection because their fathers were Victorian Railway employees and had been appointed to the Narre Warren Railway Station. What follows is the list of First World Soldiers who are listed on the War Memorial, their connection to Narre Warren and their Service Number (SN) so you can look up their full service records on the National Archives website, www.naa.gov.au

I wish to acknowledge the research of Chris McKenna of the Berwick RSL, who has researching local soldiers for many years, it has been very helpful in correctly identifying these soldiers.

Brown, J  This man is currently a mystery. According to the Australian ANZACs in the Great War website there were two Mr Browns who had a Narre Warren address  and they were brothers -   Robert Woodside Brown from Narre Warren North (SN 3040) who enlisted July 21, 1915 and Returned to Australia on May 18, 1919. His brother,  Alfred Hart Brown (SN 1217) from Narre Warren enlisted November 8, 1916 and Returned to Australia on December 11, 1918. Neither of them are J. Browns, so if anyone knows who this is, then please contact me.

Burns, Charlie  I know this is Charlie Burns, as there are various reports in local papers at the time of his talents as a entertainer at local functions. At the annual cricket club concert held October 9, 1914, Charlie was again to the fore with his humourous songs, clog dances and spoon items (Berwick Shire News and Pakenham Gazette October 14, 1914)  There was  a report of his recent enlistment in the February 16, 1916 issue of the paper. The Australian ANZACs in the Great War website has five Charles Burns who enlisted from Victoria and going by occupation (he's  a labourer) and date of enlistment I believe (but I cannot confirm) that our Charles has the Service Number of 4373 and enlisted on December 24, 1915. He Returned to Australia May 29, 1919. 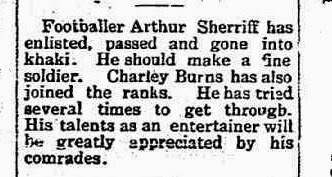 Dewar, Alfred James (no SN listed) Alfred enlisted on July 20, 1915 and he died of 'cerebro spinal meningitis'  less than a month later on August 15, 1915. His father's address was Drouin on the enlistment papers. A report in the Berwick Shire News and Pakenham Gazette of August 18, 1915 said the  Dewar family of Drouin who have suffered so severely through the meningitis epidemic were some years ago residents of Harkaway. Mr Dewar owned a property on Hessell's Road near the old church. An earlier report in The Argus (August 13, 1915) said that Private Dewar had returned home suffering form what he thought was influenza, but it turned out to be meningitis and his mother, who was nursing him contracted the disease and died after 24 hours illness. A tragic story.

Duncan, D   I believe this may be David Baird Duncan  (SN 2366) based solely on his occupation of Orchardist. There were two other D. Duncans who enlisted from Victoria -  David John Duncan (SN 2292)  was a coach builder and David Francis Duncan (SN 6665) was a jeweller, both have a Melbourne address. The Bailey family has established  an orchard at Narre Warren North in the 1890s and this was the first of many orchards in this area, thus being an orchardist is a likely occupation for someone from Narre Warren, but I cannot find any actual connection to this area. David was born in Scotland and enlisted on May 10, 1915 at the age of 20. He Returned to Australia April 5, 1919.

Hillbrich, A  I am not sure who this is - There are only three Hillbrichs (or Hillbricks as it is spelt on the Nominal and Embarkation Rolls) who enlisted - Ernest and Harold are written about below and the other one was Norman (SN 5326) who enlisted on January 14, 1916 and Died of Wounds on May 6, 1917. The Memorial lists A. Hillbrich as having returned, so that doesn't tally with Norman's record. The three Hillbrichs are all descendants of Johann and Maria Hillbrich who settled in Harkaway in 1855.

Hillbrich, Harold Herbert (SN 11760) Listed as Hillbrick on the Nominal Rolls. Harold was born in Narre Warren and enlisted on November 3, 1915. He Returned to Australia on June 12, 1919.

Ireland, Percy Markham De Courcy (SN 1116) Percy's parents, De Courcy and Margaret Ireland are listed in the Electoral Rolls at Narre Warren in 1903, so it is possible that Percy went to school at Narre Warren. In 1914 the family was living in Heidelberg. Percy enlisted on May 25, 1915 and Returned to Australia on April 13, 1919.

Kent, Alfred Ernest (SN 3336). Alfred enlisted on August 2, 1915.  Alfred is also on the Berwick Grammar School memorial in Church Street, Berwick.  Alfred was from Narre Warren and his parents, Anthony and Mary Kent, had arrived in Narre Warren around 1875 and purchased Granite Park (which they re-named Oatlands). Alfred was married to Alice Webb, the daughter of Sidney and Ann Webb.  Alfred was 40 when he enlisted as was Killed in Action in France on May 5, 1916.

Kent, Charles Edward  ( SN 237)  Charles was a farmer from Narre Warren and he enlisted on February 28, 1916. He Returned to Australia on April 5, 1918. Charles and Norman are brothers to Alfred (above) 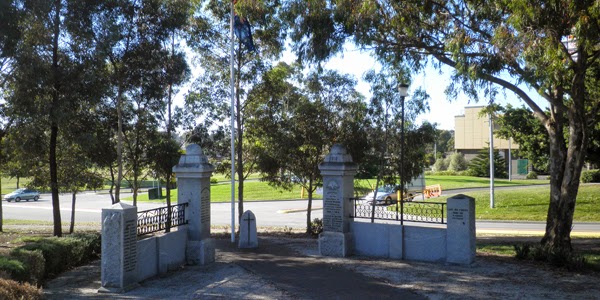 MacKenzie, Dugald (SN 6069) Dugald enlisted on March 22, 1916, He was a widower and his occupation was 'nurseryman labourer'. His address on enlistment was South Melbourne, but a Dugald MacKenzie is listed in the 1914 Electoral Rolls at Narre Warren, occupation Nurseryman, so I am sure that we have the right man. Dugald was Killed in Action in France on May 4, 1917.

McClure, Alexander David  (SN 516) Alexander enlisted on February 10, 1915. He was the son of Colin McClure. Alexander was a miner from Benalla when he enlisted and I found his connection to Narre Warren in a report in the Berwick Shire News and Pakenham Gazette of May 17, 1916. the report states that McClure, road foreman on the Victorian railways at Yackandandah, who was well known in this district as one of the prominent members of the Narre Warren Cricket Club, has had the sad misfortune to lose his son in the war. The article then has some reports from his friends about his death and his friend said that Alexander died as he lived, game and cheerful to the last. Alexander Died of Wounds, received at Gallipoli,  November 20, 1915.

Mouser, George.   Lieutenant George Mouser  enlisted on May 1, 1916. His next of kin was his father, John Mouser of Narre Warren. John was the Station Master at Narre Warren from July 1915 to August 1918.  He Returned to Australia on July 24, 1919. George is also listed on the Bunyip Methodist Church Honour Roll  His father was at the Bunyip Station around 1903.

Muffett, John Henry (SN 3104) He is listed as Muffit on the War Memorial.   John enlisted on January 6, 1917 and was Killed in Action on August 26, 1918. I believe that the connection to Narre Warren can be found in a report in South Bourke and Mornington Journal on April 8, 1903. The article reports that railway line repairer, Benjamin Muffit (sic) was killed on the railway line. Muffit resided in a gate house on Lalor's Road, about a quarter of a mile from the Narre Warren Station. He was 42 years old at the time of the accident and he left a wife and four children. There is a birth of a John Henry Muffett in 1892 to a Benjamin and Mary Muffett and his next of kin on his enlistment paper is his mother, Mary. I believe that John is the son of the deceased railway worker and may have went to school at Narre Warren.

Neil,  W  No luck so far in identifying this soldier. There was a William Neill who was the Station Master at Narre Warren from April 1912 until he was transferred to Yarra Glen on June 1, 1914. Is this the connection? He had  a son Wilfred Vivian born 1894 but he didn't enlist.  Any help appreciated on this one.

Smith George Stephen (SN 3679).  George was born in Horsham and was living at Longwarry when he enlisted on  August 7, 1915. He was Killed in Action in France on March 31, 1917.  It took some research to identify George as, according to the Australian War Memorial website, there were 53 G. Smiths who did not return, of these 19 were Victorians, so I concentrated on these 19 and still could not find  a Narre Warren connection until I found a George Adolphus Smith listed in the 1903 Electoral Roll, where he was the Station Master at Narre Warren. Then I went back to my 19 soldiers and discovered that our George was the son of a George Adolphus Smith and that the elder George was listed as the Station Master at Longwarry in 1914 Electoral rolls, so it all fitted. George was 19 when he enlisted in 1915, thus born around 1896. An article in the South Bourke and Mornington Journal of  June 23, 1909 reports that Mr George Smith was leaving Narre Warren after eight years as Assistant Station Master, so both young George and his brother, William (see below) would have attended Narre Warren State School. As a matter of interest, Colin McClure, the father of Alexander McClure, above, 'occupied the chair' for the Smith's farewell social.

Smith William Edward (SN 20121) William is also the son of George Adolphus Smith and was born at Creswick and was living at Longwarry when he enlisted on April 4, 1917, just four days after his brother was killed. He was 18, thus born about 1899. William Returned to Australia July 18, 1919.

Stedman, Albert  (SN 3262) Albert enlisted on July 14, 1915 and he was an 'asbestos worker' not an occupation that you hear of today. His father, also called Albert, was Station Master at Outtrim.  Albert was Killed in Action in France on July 28, 1916. Albert senior was the Station Master at Narre Warren for eight years and he left in July 1906 as he was appointed to Port Fairy. A report in the South Bourke and Mornington Journal of July 11, 1906 says that Mrs and Mrs Stedman had a very enjoyable farewell  social at the Mechanics' Institute.

Woodley, George Herbert (SN 4570) George was the son of Thomas Woodley, who had a bakers shop on the corner of the Princes Highway and Webb Street (click here to see a picture of the shop) George enlisted on August 18, 1915 and was discharged on October 4, 1919. George's brother, Ernest Simmill Woodley, had enlisted on August 16, 1915 but  he was discharged due to being medically unfit on May 29, 1916 as he suffered from 'traumatic epilspsy'.  Their father, Thomas,  had died in January 1906, he had gone to Melbourne to watch an interstate cricket match and later died of ptomaine poisoning (or food poisoning caused by putrefication)  said to have been caused by the pie he ate for lunch. 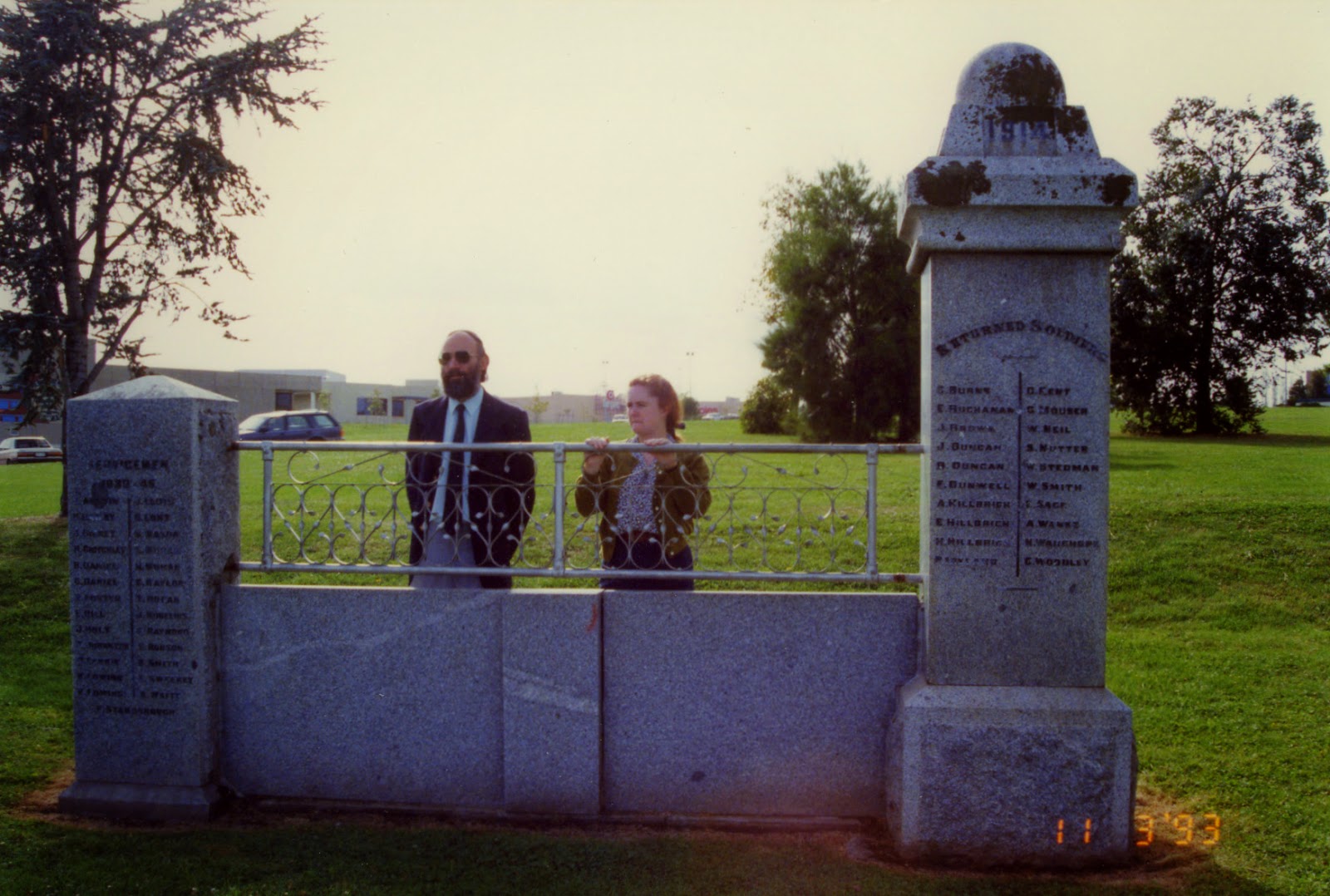 This picture was taken in 1993, just after the Memorial was moved to the Civic Centre site.That's long serving Council Officer, David Westlake with a colleague.
Posted by Heather at 9:49 PM